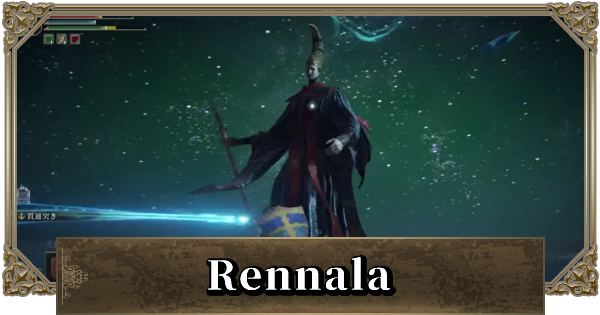 Rennala, Queen Of The Full Moon is a boss in Elden Ring. Guide includes how to beat Rennala, Renala, boss fight, weaknesses, drops, attack patterns, strategy, tips, defeat, & how to battle with Renala!

Rennala, Queen Of The Full Moon

Attack The 3 Students With A Golden Aura

▲ There is no need to defeat them. You just need to attack them once.

If you attack the 3 students that give off a golden aura, Rennala's shield will break and cause her to fall. While Rennala is vulnerable, attack her repeatedly to reduce her HP.

When Rennala begins to emit light, she will unleash a powerful shock wave. Be sure to avoid this by keeping your distance. She will regain her barrier again after her attack, so repeat the process of attacking the 3 students.

Summon A Spirit After Her First Beam Attack

In the second phase, Rennala will start off by shooting a powerful beam of light. Summon a Spirit after her first attack. Rennala can be easily staggered, so try summoning a spirit that can distract her such as the Lone Wolf Ashes since it spawns three of it.

Rennala Can Be Easily Staggered With Consecutive Attacks

Rennala is easily staggered with normal attacks. Try to land 2 to 4 consecutive attacks instead of attacking once while she is vulnerable.

Ignore The Spirits Summoned By Rennala

Rennala will summon various illusions when her HP reaches 60%. The summons will disappear after a certain amount of time, so no need to attack them. Concentrate on avoiding their attacks instead.

▼ How To Handle Each Spirit Summon

Rennala - Attack Patterns & How To Avoid

Books Can Be Avoided By Moving In A Zigzag

The books thrown by the students in the first phase can only be avoided by moving left and right while running. When dealing with the students, try not to move in a straight line and avoid rolling.

The beam has a long duration so try to dodge and approach her. Roll forward diagonally at the moment she casts it, then approach her to land a series of attacks.

Once the tracking bullets advance in an arc, close the gap with Rennala while evading the bullets.

Avoid The Barrage Of Projectiles By Dashing

Avoid the barrage of energy by simply dashing to the side. If you are close enough to retaliate, try rolling forward when you are halfway through the barrage.

Staff Throw Won't Hit If You Are At Close Range

Her staff will not hit you when you are at close range. Try to approach her before she throws her staff for a chance to counterattack.

Keep A Distance From The Falling Moon

Rennala will float in the air and drop a falling moon that explodes in a circular area. The time that the moon falls is slow, so don't panic and keep a distance from it. If you get used to it, you can also land an attack and evade immediately.

How To Deal With Spirit Summons

If the giant is summoned at a short range, avoid the first attack by rolling. Afterwards, it is alright to keep running until it disappears.

[Wolf] Ignore Them And Attack Rennala

The wolf summons, although there are multiple, are not as threatening as the other summons. If you can keep a distance from them, you can attack Rennala.

[Dragon] Sneak Under Its Body And Avoid The Flames

The dragon summon will breathe fire that covers a wide range for its first attack. Once you see the dragon, sneak under its body to avoid the flames and keep running until it disappears.

The Hound Knight has a wide attack range and agile movements, making it a threatening summon. Watch its movements carefully and roll at the right time while keeping the Hound Knight and Rennala onscreen.