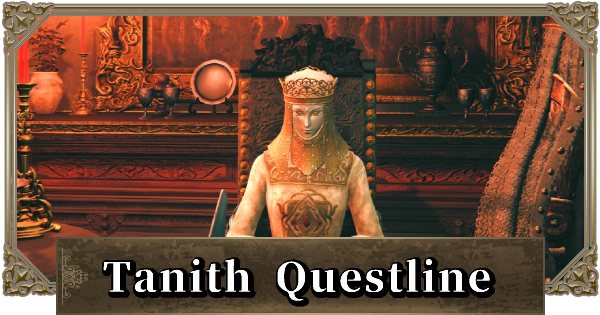 The Questline Cannot Proceed If You Defeat Rykard

Video On How To Get To Volcano Manor

Side Story: Pushed Down By Patches On A Cliff Along The Way

Talk to the NPC (Tanith) near the Site of Grace in Volcano Manor. When you choose the "Become a member of Volcano Manor" option, the questline will proceed and you will be given the key to the Drawing-Room.

After receiving the key to the Drawing-Room, open the door at the left end of the back passage and enter the room. Pick up the Letter from Volcano Manor on the table.

After picking up the letter from Volcano Manor, the location of the target, "Istvan, the Old Knight," will appear on the map. Head to your destination while looking at the above image or the in-game map, and examine the red Summon Sign to invade Istvan's world and defeat him. Once defeated, return to Volcano Manor and talk to Tanith near the Site of Grace several times to report your findings.

After reporting to Tanith, return to the room where you picked up the letter earlier and pick up the next "Letter from Volcano Manor" that has fallen.

After picking up the letter, the location of the next target, "Rileigh the Idle", will appear on the map. Head to the location as you did with Istvan, and after defeating it, return to Volcano Manor and report to Tanith.

After reporting to Tanith, talk to Patches near the entrance of the Volcano Manor to receive 'Letter To Patches'. Similar to the previous targets, you will have to go to the location of the Great Horned Tragoth as shown in the map above and defeat it. Please refer to the video below for the directions since the path towards the location is complicated and you will find Magma Wyrm Makar, a boss, along the way.

After defeating the boss Magma Wyrm Makar, examine the Red Summon Sign in the same area and defeat Great Horned Tragoth. Afterwards, return to the Volcano Manor and talk to Patches. Select "The request is done" option to report. After that, rest at a Site of Grace and speak with Patches to receive the Magma Whip Candlestick.

Pick up the letter from the table in the guest room at Volcano Manor. The name of this letter is the "Red Letter."

After picking up the Red Letter, the location of the next target "Juno Hoslow, Knight Of Blood" will be displayed on the map of the Mountaintops of the Giants. Similar to the previous targets, head to the location and return to the Volcano Manor after eliminating the target.

Once you return to the Volcano Manor, speak with Tanith to obtain the reward Taker's Cameo. If you continue with the conversation, you will be prompted with the option "See The Lord" and if you select it, you will be taken into battle with Rykard, Lord Of Blasphemy.

If you select the "See The Lord" option, you will be taken to the area where Rykard is located in the Volcano Manor. This battle will have two phases in a row, along with the God-Devouring Serpent, so make sure you are well prepared before entering. Once the boss is defeated, all NPCs in Volcano Manor will disappear. So make sure to complete all NPC quests that interest you before proceeding.

NPCs And Quest Rewards That Disappear

Enter the Altus Plateau, descend to the bottom of the valley in front of you, and head north to the Shaded Castle. Patches sits in the corridor in front of the boss area of ​​the Shade Castle, and when you talk to him, you will be given a Dancer's Castanets and request you to give it to Tanith.

Tanith will no longer be in the Volcano Manor since she has moved to the boss area where you fought Rykard. If you talk to her and give her the Dancer's Castanets, she will give it back. Take note that you will not receive any particular reward and the Dancer's Castanets will be gone from your inventory.

When Tanith is no longer at the area where she's usually found, fast travel back to where you battled Rykard. You will see Tanith in the location of Rycard's corpse. If you want to hear her story, talk with her first, and when you're done, you may attack and kill her.

When Tanith is defeated, Tanith's Knight will invade and battle you. If you defeat Tanith's Knight, you can get the incantation Aspect of the Crucible: Breath. Also, if you check the position of Tanith's corpse, you can find the armor Consort's Set.