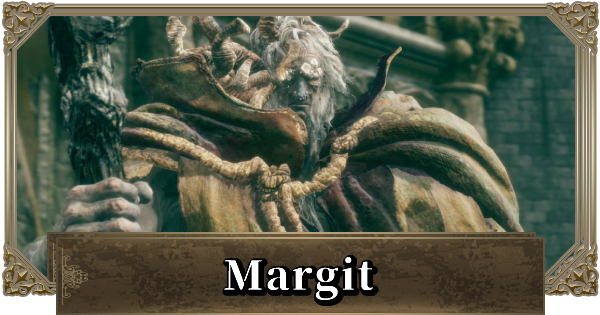 Margit The Fell Omen is a boss in Elden Ring. See the recommended level, how to beat Margit, boss fight, weaknesses, drops, strategy, how to defeat, & how to battle!

Prepare Hemorrhage Items Ahead Of Time

Margit is easy to inflict with Hemorrhage. Purchase items that give this status effect like Blood Grease to prepare for battle.

Reduvia is a dagger that has the Hemorrhage status effect. Aside from being able to attack from afar, being able to inflict Margit with its weakness Hemorrhage makes beating it a much easier task.

Until you get used to Margit's attack patterns, you'll most likely get hit by a large amount of its attacks. To ensure that you win the battle, make sure to bring Holy Water Pots and upgrade your weapons.

Use Margit's Shackle To Restrain Margit

Margit's Shackle is an item you can use to temporarily restrain Margit. By pairing this item with a weapon that has the Hemorrhage status effect, you'll be able to win the battle without having to do much work.

▲ The Beast Crest Heater Shield may be found in a treasure chest inside a tent as seen in the images above. Be careful as this area is full of enemies.

Margit's attacks have a wide area of effect, so the possibility of you getting hit is quite high. If you have a 100% Physical Damage Reduction Shield with you, it'll be much easier to go through an extended battle. If you can't achieve this with your build, we recommend that you get one. Check the details of where you can pick one up in the table above.

Once Margit's HP runs low, he will start to attack using glowing weapons like his hammer that deal Holy elemental damage. Attacks from these weapons can still inflict damage on you even with the 100% Physical Damage Reduction Shield. Make sure you have a good level of HP especially in Phase 2.

Summon A Spirit To Use As A Decoy

Summon a Spirit Ash as soon as your battle with Margit begins. By doing so, the Spirit Ash can both support your attacks while also distracting your enemy - making it possible to fight solo. We also recommend using Spirit Ashes that can have status effects like Jellyfish Ashes or ones that can easily attract attention like Lone Wolf Ashes.

Utilize Sorcerer Rogier At The Passageway In Front Of The Boss

At the passageway right before the area where you fight Margit, you'll encounter a sign and a golden rune. By inspecting both, you'll be able to summon Sorcerer Rogier who can fight together with you like Spirit Ashes. This is another useful way to support your attacks and distract your enemies, so summon Sorcerer Rogier as well before the battle.

Keep A Safe Distance, Attack Once, Then Withdraw

Margit has only one type of ranged attack. With that said, he usually only uses melee attacks and thus enables you to safely battle with him by doing a cycle of keeping a safe distance, attacking once, then withdrawing.

Margit How To Beat

Repeat A Cycle Of Attacking Once & Withdrawing

Margit is primarily a melee attacker. He often attacks consecutively, so fighting with a melee weapon will increase your chances of getting hit. In any case, the most recommended way to battle is to keep your distance first, then as soon as his consecutive attacks are done, attack once, withdraw, and repeat the cycle.

By repeatedly inflicting jump attacks, you can lower Margit's poise. This gives you an opening to attack it from the front and inflict a fatal blow.

How To Evade Margit's Attacks

Evade As He Descends From Jumping Hammer Attack

After making 2 consecutive swipes with his hammer, he'll make a big swinging motion as he jumps into the air and descends to attack. Although a powerful attack, the lag time is long, making it easy to evade by dodge rolling at this critical moment.

Once Margit holds his sword with both hands, he'll rush toward you with cut-off attacks. You can easily avoid these attacks by doing forward rolls toward Margit. Time when you'll roll again for the his second attack.

Margit tends to use a combination of his cut-off attacks and using his glowing sword. You'll get hit with continuous slashing attacks if you attempt to dodge forward or sideways, so keep your distance by rolling backwards.