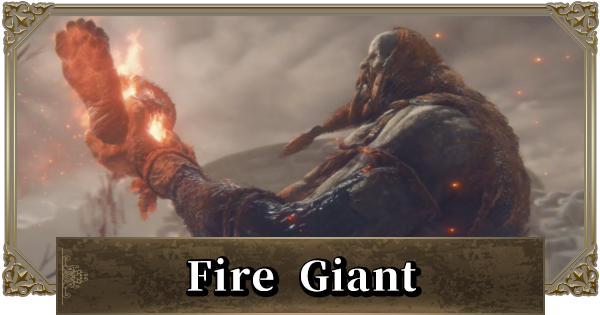 Fire Giant is a boss in Elden Ring. Guide includes how to beat Fire Giant, weakness, location, drops, strategy, how to defeat, weaknesses, & how to battle with Fire Giant!

At The Mountain Top Of The Giants

It is located at the "Forge of the Giants" on the Mountain Top of the Giants. This is one of the boss that you must fight in order to progress through the game's story.

Fire Giant Strategy & How To Beat

Most Of Its Single Attacks Are Deadly

The character's HP can decrease drastically on every single blow or attack coming from the Fire Giant. If your character has a low HP, you might be killed in a single hit thus you must dodge properly to avoid its attack.

If your character is a melee wielder you can attack the Fire Giant's legs unless you have a long-range weapon that can be used while you are far away from the Fire Giant.

Horses Are Useful When HP Drops Below 50%

Once the Fire Giant's HP drops below 50% it will drop onto his knees creating an opening for an attack. Using a horse, you can sprint your way behind the giant and make an attack.

How To Avoid Attacks

Two Fireball Attacks Can Be Easily Avoided By Riding A Horse

When the Fire Giant's HP drops to 50% below it will release two massive fireballs, in order to avoid them, use a horse to dash away and avoid the fireballs. Make use of the rocks, trees, or even wooden objects as a shield.

Evade Meteorites Depending On How Far You Are