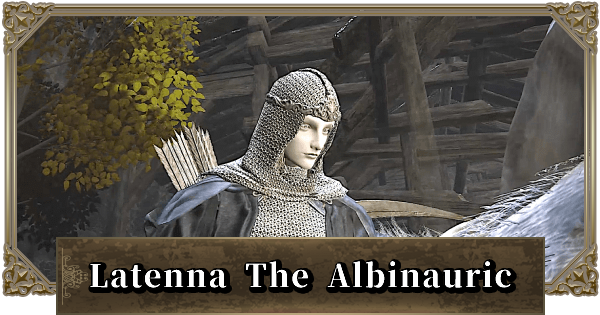 When you climb the slope of the Village of the Albinaurics, you will find a jar in the back. If you attack or roll this jar, Albus will appear from inside and you can get the Haligtree Secret Medallion (right). After talking three times, he will talk about Latenna and requests that you give the medallion to her should you meet her. After that, Albus will perish.

NPC Battles Occur When Returning To The Roundtable Hold

The battle with the NPC Ensha will get triggered when you got the Haligtree Secret Medallion (Right). Since the attack range of Ensha is narrow, it is better to attack at a distance. If you defeat Ensha, you can get the weapon Clinging Bone.

When Ensha is defeated, the person in front of the archives with his arms folded is replaced by a Royal Remains set of armor. You will also hear an apology from Gideon Ofnir for the sudden ruckus.

To meet Latenna, you need to break through Lakeside Crystal Cave. Defeating the Boss' Bloodhound Knight will clear the dungeon. Even after defeating the boss, you should not teleport away and continue heading deeper in the dungeons to find the goal: Latenna

After defeating the Bloodhound Knight, head further to the dungeon until you reach the Site of Grace where you can see Latenna inclining beside her wolf near Slumbering Wolf's Shack. Approach and talk to Latenna three times to get the option to acquire the Spirit Ashes of Latenna the Albinauric.

From the battle of Ensha, proceed with the main story until the clearing of Altus Plateau. Clear Castle Sol located in the north of the Mountaintops of the Giants to get the Haligtree Secret Medallion (Left).

The Boss Is Quite A Strong Opponent

Commander Niall, the boss of Castle Sol, appears at the same time with two Knight cronies and since it is a three-on-one battle, strengthen your Spirit Ashes as well as your weapons - and yourself - before taking on the challenge.

Route From The Boss's Defeat To The Secret Medallion

After collecting the Haligtree Secret Medallions left and right, head to the Grand Lift of Rold. Stand in the same position as when you climbed the Mountaintops of the Giants, switch action, and then hoist the Secret Medallion (left/right).

Enemies At The Top Of The Stairs Can Be Ignored

After getting on the Grand Lift, you will go through the aisle. After climbing the stairs twice along the way, big mob enemies will fall, so avoid the carpet in the middle.

Once you've arrived at Consecrated Snowfield, head north to obtain the map fragment. From the location where the map fragment is obtained, head further north and unlock the Apostate Derelict Site of Grace. Obtain the Silver Mirrorshield from the woman inside. An option to summon Latenna will also be displayed at the location where the shield has fallen and using it will finish the questline.

Mountaintops of the Giants
ユーザー登録のご案内