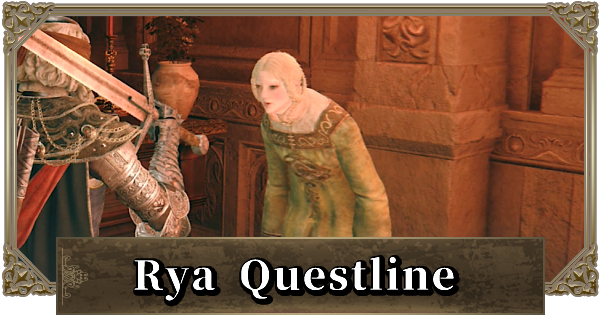 From the Site of Grace at the Scenic Isle in Liurnia, proceed as shown in the image above to reach the building with the statue. Rya is next to the statue, so talk to her.

Rya will request you to look for a pair of necklace, so head to Boilprawn Shack. See the above image for location. When you arrive, you'll see an NPC. You can either pay him 1000 Runes or defeat him to get the necklace back.

After obtaining the necklace, return to the location where you spoke with Rya. After handing over the necklace, Rya will give you Volcano Manor Invitation as a token of appreciation. After this, you'll need to head to Altus Plateau beyond Liurnia, so make sure to collect Dectus Medallion (left/right), which you will need for the trip.

The place where Rya appears changes depending on how you reached Altus Plateau. If you enter through the Grand Lift of Dectus, you will find Rya just by this lift. If you enter from the Ruin-Strewn Precipice Site of Grace, Rya will appear at the Site of Grace Erdtree-Gazing Hill near the Lux Ruins. Talking to her will warp you back to Volcano Manor.

From Arrival At Volcano Manor To The Defeat Of Rileigh

Talk to the NPC (Tanith) near the Site of Grace in Volcano Manor. When you choose the "Become a member of Volcano Manor" option, the questline will proceed and you will be given the key to the Drawing-Room.

After receiving the key to the Drawing-Room, open the door at the left end of the back passage and enter the room. Pick up the "Volcano Manor Letter" on the table. Also, talk to Rya and exchange greetings.

After picking up the letter from Volcano Manor, the location of the target, "Istvan, the Old Knight," will appear on the map. Head to your destination while looking at the above image or the in-game map, and examine the red Summon Sign to enter Istvan's world and defeat him. Once defeated, return to Volcano Manor and talk to Tanith near the Site of Grace several times to report your findings.

After reporting to Tanith, return to the room where you picked up the letter earlier and pick up the next "Letter from Volcano Manor" that has fallen. Also, talk to Rya again and ask her about the strange noises you've been hearing lately.

After picking up the letter, the location of the next target, "Rileigh the Idle", will appear on the map. Head to the location as you did with Istvan, and after defeating it, return to Volcano Manor and report to Tanith.

After Rileigh's Defeat To The End Of The Questline

After defeating Rileigh, enter the guest room at the right end of the corridor and talk thrice to Rya, who is now in the form of a snake.

After speaking with Rya in the form of a snake, talk to Tanis and the option "the form of Zorayas" will occur. Select it and proceed with the conversation.

Enter the room at the front right of the corridor and touch the wall where the corpse is located (near the wall where the painting is displayed), a hidden passage appears. Continue to the back and go down to the basement, where you will find the Site of Grace "Prison Town Church," and further down to the Temple of Eiglay, where the boss "Godskin Noble" appears.

Easy To Proceed When Illuminated By Torch Or Lanterns

The torch can be equipped in the right-hand weapon column of the equipment, and can be switched to a torch with the right cross key. Having a torch illuminates a dark place, making it easier to walk through secret passages. Torches can be obtained by purchasing from a merchant.

Once you reach Prison Town Church, go to the right side of the building and go to Temple of Eiglay to defeat the boss Godskin Noble (see video below for details on how to get there). After that, pick up the Serpent's Amniotic Membrane that is found at the back of the boss' room.

Directions From Site Of Grace At Prison Town Church To Boss

Available Later Depending On Progress

If you proceed with the Volcano Manor event until just before the quest against Rykard, even if you talk to Tanith , you will only have the option of looks like a king. In that case, the Tonic of Forgetfulnesswill not be available at this time, but you can get it if you go to the place where you were sitting after Tanith left the Volcano Manor.

[Extra] What If You Give The Tonic Of Forgetfulness To Corhyn?

If you have the Tonic Of Forgetfulness from the Volcano Manor event, you can offer it to Corhyn when talking to him on the Mountaintops of the Giants.

Even if you give Corhyn the Tonic Of Forgetfulness, the event will proceed and the rewards you will get will not change. The only difference is that depending on your Questline progress, you not being able learn Incantations from Corhyn anymore may happen earlier on.

Furthermore, even if you give the Tonic Of Forgetfulness to Corhyn, you may later give it to the intended recipient, Rya. It's good to enjoy to how the story develops as you progress.

Once you've received the Tonic of Forgetfulness from Tanith, return to the Temple of Eiglay and visit Rya for a conversation. The road to where Rya is is complicated, so please refer to the video below.

How To Get To Rya's Location

When Using The North Lift Of Temple Of Eiglay

If you have activated the lift on the north side of theTemple Of Eiglay, you can reach Rya in less time.

When talking with Rya, there are two options: to provide or not the Tonic of Forgetfulness. Depending on your selected option, the rewards you earn after killing the boss of the Volcano Manor and the conclusion of Rya will differ. The rewards are the same, but there is a difference in whether you can obtain a letter, so if you are interested in the contents of the letter, do not provide it.

After advancing the Rya-related Questline to this point, return to Volcano Manor and go to the Drawing-Room at the far left end of the corridor to pick up the letter that has fallen down. The name of the letter this time is Red Letter.

After picking up the letter, go to the location of the next target. Juno Hoslow, Knight of the Blood Tide, will appear on the Mountaintops of the Giants map. Head to the site as you did before and return to Volcano Manor after defeating him.

Once you return to the Volcano Manor, speak with Tanith to obtain the reward Taker's Cameo. If you continue with the conversation, you will be prompted with the option "See The Lord" and if you select it, you will be taken into battle with Rykard, Lord Of Blasphemy.

If you select the "See The Lord" option, you will be taken to the area where Rykard is located in the Volcano Manor. This battle will have two phases in a row, along with the God-Devouring Serpent, so make sure you are well prepared before entering. Once the boss is defeated, all NPCs in Volcano Manor will disappear. So make sure to complete all NPC quests that interest you before proceeding.

NPC And Questline Reward That Disappears

If You Give The Tonic Of Forgetfulness

After all NPCs in Volcano Manor are gone, go to the Drawing-Room at the left end of the corridor in Volcano Manor to find Rya. After the conversation, take a break at the Site of Grace and return to the same place to find Daedicar's Woe. You cannot pick up the letter.

If You Did Not Give The Tonic Of Forgetfulness

After Tanith disappears from his position, Rya returns to the place where he made the choice whether or not to give her the Tonic Of Forgetfulness. After talking with her, you will be given the choice to give the potion again, but you will fast-travel back to the Site of Grace without giving the potion. When you visit again, you will find the Talisman Daedicar's Woe and Zoraya's Letter at the place where Rya was.

Tanith Guide After The Rya Event

Enter the Altus Plateau and descend to the bottom of the valley in front of you. Head north to the Shaded Castle where you can see Patches sitting in front of the Shaded Castle's boss area. When you talk to him, you will be given a Dancer's Castanets and he will request that you bring it to Tanith.

Once Tanith disappears from the location, fast travel back to the location where you fought Rykard. Tanith will be near Rykard's corpse. If you want, talk to him and when you are done, you can attack and defeat him.

It is not known if there will be a continuation of the event, so if you know it, please leave us a comment!!

When you can't find Tanith in his usual place, fast travel back to where you had the Rykard Battle. You'll find Tanith near Rykard's corpse. Talk if you want to hear the rest of the story or proceed with attacking and defeating Tanith.

Tanith will no longer be at Volcano Manor and will have moved to the area where you had the boss fight with Rykard. If you talk to him, you'll be able to hand over the Dancer's Castanets, but there's no particular reward for doing so and the Dancer's Castanets will disappear from your inventory