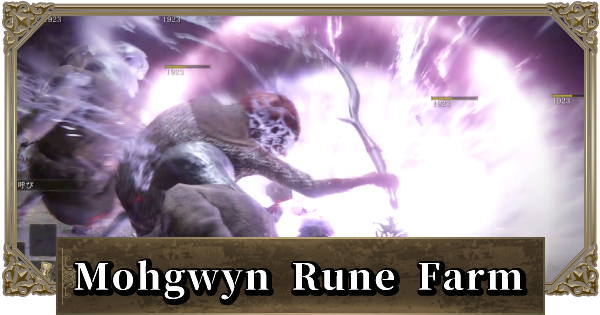 How Level Up Fast In Mohgwyn Dynasty Mausoleum?

First, go to the Site of Grace in the Cliff Road to Dynasty location. There are two different routes to get there, any of which can be used by players.

Lure Giant Crows Off A Cliff

This method is simple and straightforward. Attack the Giant Crows from the cliff directly behind the the Site of Grace with a long-range attack and return to the Site of Grace once they have been lured off the ledge. Since all you need to is to be able to attack the Crows, any bow and arrow or long-range INT spell can be used to farm Runes. Using the bow is as simple as pressing L1 or L2 to zoom in, then R1.

Defeat The Frog-Like Enemies Using A Wide Range Of Skills

The method for farming the frog-like creatues is very simple: repeatedly kill the frogs in fron of the Site of Grace and return to the Site of Grace in an endless loop. As long as you have skills such as Hoarfrost Stomp, which is available at the start of the game, it's stable farming. If you already defeated the last boss, you can use the Sacred Relic Sword for super fast farming.

If you have the Golden Scarab, it increases the rune that you earn by 1.2 times. If you plan to farm for Runes, it is recommended to grab this item first.

Mohgwyn Dynasty Mausoleum Location Guide & How To Get

1. Talk To The White-Faced Varre

After clearing the Stranded Graveyard, there is a masked person near the Site of Grace “The First Step”. Talk to him and he will ask you if you want to be a member. Accept and you will be asked to defeat Godrick The Grafted.

2. After defeating Godrick The Grafted go to the Rose Church

After defeating Godrick The Grafted, examine the "Two Fingers" that will drop on the round table. Varre at the Guidance of Grace disappears leaving a note that he is at the Rose Church in Liurnia.

Head to the Rose Church and talk to Varre. If you answer They didn't seem right, you will be given the "Festering Bloody Fingers" and an event will trigger.

The next thing you need to do is to consume 3 Festering Bloody Fingers to complete three invasions. It doesn't matter if you win or lose during the encounter, just invade 3 times. Once this is done talk to Varre once again and select the option "to become a knight" and receive the Pureblood Knight's Medal.

4. Dye The Cloth With The Blood Of The Shrine Maiden

Go to the Chapel of Anticipation from The Four Belfries in Liurnia. After defeating the Grafted Scion there, go to the church in the back, where you will find the corpse of a maiden, which you can examine to dye it with blood.

Killing Irina and Hyetta will also dye the cloth with blood, but then their NPC events will not occur, so it is recommended to go to the Chapel of Anticipation.

If you talked to Varre twice after you've dyed the clothes with blood, you'll receive the Pure Blood Knight's Medal. By using it, you'll be able to get to Moogwin Dynasty Mausoleum. After arriving, start farming runes!

The Right Secret Medallion piece can be obtained in the Village Of The Albinaurics. To obtain it, you must look for pot at the deepest part of the area. Hit it for Albus to appear and he will hand you half of the secret medallion.

2. Activate The Grand Lift Of Rold

▲You need to switch the action with either the scroll button or R Pad to use the medalion.

3. Head To Gateway Found West Of The Map

The Gateway / Portal you need to use to get to Mohgwyn Dynasty Mausoleum can be found at the bottom of the cliff in the west side of the Consecrated Snowfield. There's a Site of Grace and Map Fragments there so it's recommended to get there through this route.

4. Sanguine Noble Will Attack You, So Defeat Him

If you are heading towards the Portal gate, the Sanguine Noble will attack you, so defeat him first since the portal gate won't be used until he is defeated.

5. Transfer Gate Under The Cliff To Mohgwyn Dynasty Mausoleum

Since the Transfer Gate under the cliff is hard to find, the video above will show you the exact location and route from the big tree on the way to it. After that, you can get to the Mohgwyn Dynasty Mausoleum by using the transfer gate.