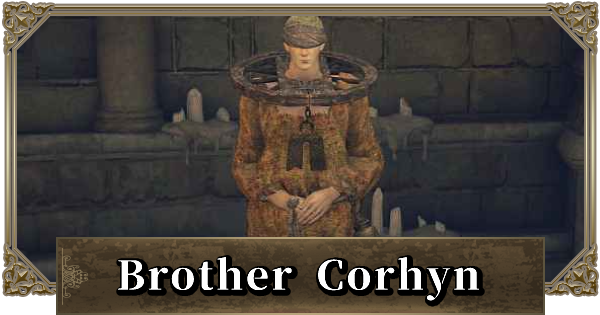 Appears At The Roundtable Hold

Advance Until Altus Plateau Then Head To Roundtable Hold

Once you have unlocked the Altus Plateau, warp to the Roundtable Hold and talk to Corhyn. After talking to Corhyn, Corhyn will appear at Altus Plateau. Corhyn is close to where the Map Fragment is located. You will be able to purchase Incantations from Corhyn there.

※Since this questline is somewhat connected to the ending, we advise those who do not want to be spoiled to play it first.

From The Beginning To Entering Leyndell, Royal Capital

Head to Stormveil Castle and fight Margit, The Fell Omen. There's no need to defeat him because if you lose to him once, you'll be able to go to the Roundtable Hold at the Site of Grace. Colin is at the Roundtable Hold, so talk to him and choose 'I see it' for the options.

Margit The Fell Omen - How To Beat

Corhyn has moved to the area where the Map Fragment is located. Talk to him and ask him about Goldmask. You can also purchase new Incantations from him.

Follow the path from where Corhyn was and you will find a Site of Grace and a Portal (Gateway) on the collapsed bridge. Use the Portal to move to the other side of the bridge and speak to Goldmask.

When you return to the location of Goldmask, you'll see Corhyn, so go ahead and talk to him. You will also be able to purchase a new Incantation called Discus of Light from Corhyn.

From Leyndell, Royal Capital To The End Of The Questline

Go down the stairs from West Capital Rampart and pass under the large tree. You will soon see a colosseum-like building at the top, so climb up to it. Talk to Corhyn and Goldmask on the cliff on the east side of the colosseum.

Proceed from the West Capital Rampart Site of Grace and climb up the Erdtree. You will encounter a boss called "Godfrey," defeat him and unlock the Erdtree Sanctuary Site of Grace. Afterwards, climb the tree from the balcony and obtain the Golden Order Principia on the second floor.

※Starts from the Erdtree Sanctuary Site of Grace

Meet with Corhyn and give him the Golden Order Principia. He will then sell you a new Incantation called "Law of Regression," so purchase it.

Follow the path to the left and take the elevator down from the Erdtree Sanctuary Site of Grace. You'll see a message in front of the statue, so use the Law of Regression on the statue. Read the new message that will appear.

The Law Of Regression Is An Incantation That Requires Intelligence

Despite Law of Regression being an Incantation, you will need an intelligence stat of 37. Because of its high intelligence stat requirement, it is almost impractical except for mage characters. To resolve this, you can respec your stats or use equipment and items that can temporarily increase intelligence.

Return to Goldmask and speak to him. A dialogue option will appear, so choose "Tell him that Radagon is Marika." You will then obtain the "Golden Order Totality" Gesture. Corhyn will then tell you new stories and sell you a new Incantation called "Immutable Shield".

Go to the location on the map above and meet Corhyn on the bridge once you've completed the Royal Capital and advanced to the Mountaintops of the Giants. The bridge is located above the Ancient Snow Valley Ruins Site of Grace, where a detour is required. If you have already explored the area, the Snow Valley Ruins Overlook Site of Grace is the nearest one to it.

During this time, you can opt to give Corhyn the Tonic of Forgetfulness that you obtained in the Volcano Manor questline. If you do, Corhyn will not move to Leyndell, Ashen Capital in the next step. As a result, it's fine to skip step 8 and go straight to step 9. The quest rewards will remain the same, but you will no longer be able to purchase Incantations from Corhyn once you give him the tonic.

▼ What Changes If You Give Corhyn The Tonic of Forgetfulness

Crumbling Farum Azula - Location & How To Get There

If you gave the Tonic of Forgetfulness to Corhyn, he will stay on the bridge at Mountaintops of the Giants after the Royal Capital turns into the Ashen Capital. Do take note that you won't be able to purchase Incantations from him once you've done this.

Goldmask's corpse can be found a short distance away from Corhyn's location. Examine it to find the Mending Rune of Perfect Order. If you examine Goldmask's corpse again after reloading, you will obtain the Goldmask Armor Set. The questline comes to a close here.

Rune Can Be Used To Get A Different Ending

If you have the Mending Rune of Perfect Order, you will be able to restore the Elden Ring using the rune at the end of the game. You'll get a different ending from the normal one, so check it out if you're interested to see it.

The Radiant Gold Mask Can Be Found In Altus Plateau

Goldmask's greaves, armor, and gauntlets are the only items that can be looted from his corpse. The Radiant Gold Mask can be found at the edge of the collapsed bridge after proceeding from the Road of Iniquity Side Path Site of Grace in Altus Plateau.

What Happens If You Give The Tonic Of Forgetfulness To Corhyn? - Brother Corhyn Questline

Giving The Tonic Of Forgetfulness Will Change His Dialogue

If you talk to Corhyn while you have the Tonic of Forgetfulness (obtained from the Volcano Manor questline), you will get the option to give the tonic to him. If you proceed with the questline after giving it to Corhyn, his comments about Goldmask will change, indicating that he drank the tonic.

There Are No Changes In The Quest Rewards

Even if you gave Corhyn the Tonic of Forgetfulness, the questline can still be progressed and the rewards will still be the same. The only thing that will change is that you can no longer purchase Incantations from Brother Corhyn as you continue the questline.

In addition, if you gave the tonic to Corhyn, you can still give it to Rya, for whom the item was intended. Go ahead and enjoy the changes in Corhyn's dialogue.

Incantations Available For Purchase From The Beginning

Incantations Available By Progressing The Questline