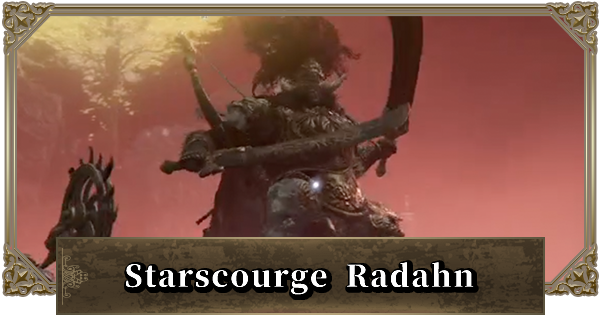 Radahn appears in Caelid southeast. In order to fight Radahn, it is necessary to hold the Radahn Festival at the NPC event that originates from Ranni's questline.

How To Fight Starscourge Radahn

Level Up And Prepare Equipment

Radahn's attacks can cause instant death when your character level is low. When your stats are low, you may not be able to tolerate the attacks, so try to challenge at least level 50 or higher.

Best To Prepare Equipment With Hemorrhage And Poison Effects

Status conditions such as Hemorrhage, Poison, and Frostbite are highly effective against Radahn. It is recommended to prepare equipment with those status effects before challenging.

Radahn will target your allies so we recommend to attack at a safe distance and dodge its attack. If you really want to win, you will need to strategize with magic using a respec.

You can summon allies in various parts of the area as bait to distract Radahn. If you summon multiple allies, Radahn's focus will be scattered around different targets and you will have a chance to attack.

Dead Allies Can Be Resummoned Later

Allies who died after being summoned can be summoned again once a certain amount of time has passed. The more allies you have, the more it will easy to attack it even when not engaging directly, so call forth as many as you can.

Know How To Dodge Radahn Attacks

To overcome Radahn's succession of instant death attacks, you must first learn how to evade Radahn's attacks. The assault patterns are outlined in the video linked below, so let's use it in line with the strategy.

▼ Jump To Radahn's Attack Patterns & How To Avoid

The behavior pattern of Radahn changes according to its remaining HP. The lower the remaining HP, the more powerful the attacks. Your character will most likely die instantly, so it is necessary to refrain from any direct attacks and change the turn around depending on allies and status conditions.

Behavioral Patterns To Watch Out For

Three arrows will be shot from a considerable distance at the start so to avoid these, make sure to use barriers and dodge them. Meanwhile, gather allies around you.

② Switch To Riding A Horse To Avoid Scattered Arrows

① Later, change to riding your Horse to avoid the scattered arrows that track you for some time. During this time, if you go near Radahn early, it will target you, so approach it with summoned allies.

④ Attack Behind When You Are Not The Target

Attack from behind when Radahn's target is directed to a summoned ally. If you do not take advantage of this chance to attack, your summoned allies will die before you can cut Radahn's HP into half, and it will be almost impossible to play, so be careful. Depending on the target of Radahn, there is also a driving element of luck.

If Radahn's sword is charged with Lightning, it is proof that Radahn's HP has dropped below 75%. Attacks up to 50% HP remain generally the same, but since the attack patterns will increase, let's switch smoothly between riding a Horse and evading on foot.

When Radahn's HP drops below 50%, he disappears from the area and come falling back in a meteorite. Make sure to look up in the sky and check the direction of the meteor then switch back to riding a Horse to run sideways against the meteorite.

② Summon Allies As You Roam Around

Depending on the battle style, it is often the case that allies can be revived again after a meteorite attack. After avoiding meteorites, summon your allies and go around.

③ Take Time To Escape While Allies Gets Attacked

When HP drops below 50%, instant death attacks are frequently performed, so it is important to go around without being attacked by even one shot. Especially when fighting in close proximity, the risk of being hit is high, so concentrate on avoiding it and have your allies cut it.

Drink a Flask of Wondrous Physick that was mixed with Cerulean Hidden Tear, and quickly cut with Rock Sling. This is a tactic to reduce chances of getting hit in both ranged and melee battles.

How To Obtain The Required Equipment

There are two ways to avoid long-distance arrow attacks. Depending on the situation, you can press the dodge button at the right time, or use obstacles for cover to avoid getting hit.

Since the attacks don't track faster than the speed of a Horse, you can dodge them by riding a Horse.

A move that unexpectedly doesn't hit its target. Rather than purposefully avoiding these attacks, just hope that you don't get hit as you run and dodge. If get hit by it, the damage is minimal, so stay calm and prepare for the next attack.

If you are using a Horse, keep a distance and move out of range, and if you are on foot, avoid it in a timely manner. You can dodge its attacks by avoiding its movements when you're by its feet, and if you are close enough, aim to attack aggressively.

This attack shoots slashing waves radially from the ground. Since it doesn't target as its up in the air, you can avoid getting hit by jumping with your Horse.

Since the range of this move is wide, it's best to move around at the far back end to avoid it. Even if you get hit, the damage is relatively low, so it's not highly dangerous.

Press Dodge just before the lightning strikes. When riding a Horse, simply dash sideways against the bullet.

Ride your Horse and dash sideways against the meteorite. If you have trouble finding meteorites, hope that you don't get hit and dash with all your might to avoid them.

Four glowing rocks floating in the air appear around Radahn, and after a while, they are launched directly at you. If you get hit, you will die instantly, so be careful and do not to take your eyes off Radahn while these rocks are still around its body.