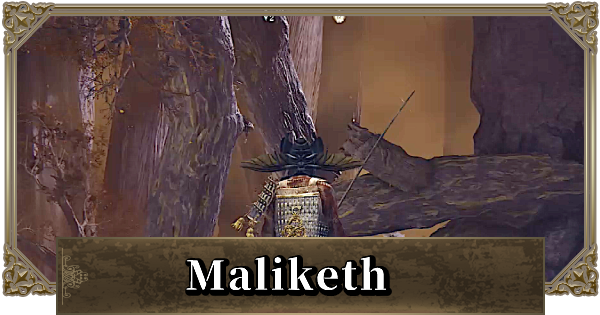 Guarding Is Effective Against Beast Clergyman

In the first half of the game, you'll begin to fight Maliketh in his Beast Clergyman form. He performs a large strike at the end of a series of blows if you are at close range. For this reason, block the attacks then counter attacking is effective. Equip a shield with 100% physical cut.

HP Management Is Important Against Maliketh

▲ If you are burning red, your HP is decreasing.

The Beast Clergyman transforms into Maliketh, the Black Blade at 50% HP. When hit by a slash, your Max HP will decrease and a continuous damage will occur. Always keep an eye on your HP, because if you put off using heals, there's a high chance you can unexpectedly die.

Hide Behind Pillars When It Is Dangerous

There are pillars standing in the combat area. It is recommended to use these pillars as shields or the shadows to blocks him if you need to heal. However, both Beast Clergyman and Maliketh have attacks that can bypass pillars.Think of it as a momentary emergency workaround.

Blasphemous Claw is used in conjunction with an attack in which Maliketh's sword glows, the attacker will be frightened for a certain period of time, creating an opportunity to attack. As long as the timing is right, it is effective even at a distance, so it should be used when attacks are directed at Spirit Ashes, for example.

May Swing The Sword Forward

When frightened, Maliketh may swing his sword forward. Even though it is a good chance to attack, approaching it from the front will result in damage, so go around it and approach it.

When Beast Clergyman is nearby, the last of his melee attacks is a smack. Guard against a barrage of strikes to avoid being struck and fight back. There is a pattern to the barrage of attacks, but all of them are mostly slamming. However, it requires a significant amount of Stamina, so wait for your Stamina to recover before approaching.

If Stamina Is Lacking, Make Up For It With Evasion

Depending on the build, there should be times when you can't take a barrage of hits. Because it frequently builds up and then swings away before hitting, it is feasible to get closer to establish contact, then move out a bit and wait for the swing away, then jump into this to induce the strike.

The Swing Attack Is An Attack Opportunity

After pausing a bit, the boss will do a swing like attack scratching the ground. A large gap will be created avoid it toward the direction of travel, and then counterattack. However, there is a high chance that stones will be summoned from this, so be prepared to avoid those stones as well.

If the Beast clergy gripped the ground while running, it will throw stones towards you right after it. It is easy to avoid if the evasion is put in at the time of the preliminary movement. After it stands and grip the ground, a slight pause occurs.

Once Both Arms Are In The Ground, Keep An Eye On The Rock

When Beast Clergyman stabs both arms into the ground, it is a broad attack that lifts rocks. The ground within range is covered with raised rocks, so look carefully and go to a safe place. The lifted rocks will fall around Beast Clergyman at different times, so wait for them before approaching.

Avoid The Waves Of Slash By Dodging Forward As It Hits

For the attack where the boss uses his hands to hit the grounds sending waves of slashes towards you, it can be dodged by rolling right as it hits you. However, this requires time to get used to. Guarding against the attack is also an option.

If Maliketh performs a two-handed and swung up from the inside. A two slash combo from the air will be done. This series of attacks can be avoided by synchronized rolling. The aerial Spinning Slash is a multi-stage hit, so avoidance at the last minute is preferable.

Dodge The Dual Spinning Slash By Sneaking Close To Maliketh

When Maliketh swings inward, it will also perform two quick Spinning Slashes in quick succession. If you get into the pocket (close to Maliketh), you won't get hit. Since it is often counter-intuitive and promises two hits in a row, you want to stabilize the evasion if possible.

If Maliketh jumps and slams down the ground there is a high chance that it will continue with a plunge attack. When Maliketh jump, make sure to mind dodging the following attacks too. After the ground attack it could be a blast attack or a slash attack. For Blast, dodging at the same time as the explosion will do.

▲If there are flames in its torso, an explosion will appear.

For the attack shown above, avoiding Maliketh is recommended. If you are around the area where the Plunge attack happened, there will be an explosion that will occur. It is difficult to dodge so it is best to just stay away.

If Maliketh Did A Wide Swing, Keep Your Distance

If Maliketh swings the sword wide, he will release a series of slashes around itself afterwards. So, after dodging the wide slash, keep your distance. The wide slash kinda tracks players so guarding is also an option.

When Maliketh Jumps Into A Pillar, 2 Kinds Of Attack Can Happen

When Maliketh Jumps Away From The Pillar, Ranged Attack Will Occur

Sends out a Flying Sword occurs As Maliketh jumps back from the pillar; the trick is to wait for Lucidity to jump back. The rule of thumb is to jump back and then roll around the sword.

When the Sword Glows, Exploding Attack Will Occur

When Maliketh's sword glows as it flies into the pillar, it explodes from the thrust.Evade backward in time with the thrust and again immediately afterwards. This will allow you to roll just in time for the explosion.

If the sword shines twice an arial slash followed by pierce towards the ground and explosion will occur. The workaround is the same as above but requires familiarity. It is easy to deal with flying slashes if you have a habit of avoiding them backward to the left or right.

Maliketh immediately cleaves after 3 flying Slashes. The attack is extremely fast, so after avoiding the third flying slash hit the evade button repeatedly to avoid getting hit.