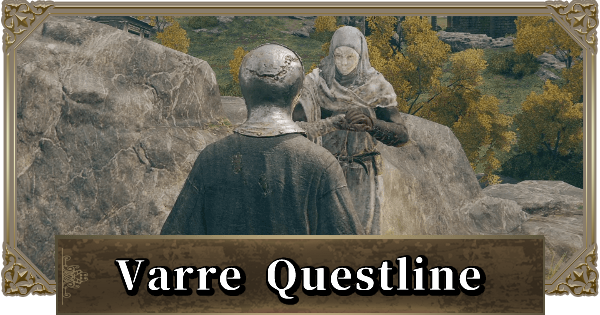 Varre Questline & Location Guide for Elden Ring. See if possible offline, invasion sign, Varre Mask, rune farm, what happens when killed, & what to do if Barre not at Rose Church

Appears At Limegrave's The First Step

As soon as you leave the Stranded Graveyard which was also available in the tutorial, you'll find White-Faced Varre right in front of the Site of Grace. Talk him and he'll teach you about the Site of Grace, as well as the various locations you should aim for.

Next, aim toward the direction of Stormveil Castle and on your way there you'll fight with Margit The Fell Omen. You don't need to win the fight with Margit, and finishing the battle will trigger your ability to be able to go to Roundtable Hold from the Site of Grace.

Upon going to Roundtable Hold at least once, a conversation with Varre at The First Step will be available. You may proceed with the Questline by choosing the option of aiming to be a true member in your conversation.

Next, you will have to beat Stormveil Castle's boss Godrick the Grafted, so proceed after beating Margit The Fell Omen. After defeating Godrick, go back to The First Step to talk to Varre and he'll tell you to meet Two Fingers at Roundtable Hold. Do as he says and go to Roundtable Hold to proceed.

If you meet Two Fingers at Roundtable Hold, Varre will disappear from The First Step. If this happens, Varre will have moved to Liurnia's Rose Church, so check for him there. You'll see a message pop up at the his original location.

Liurnia's Rose Church can by found by going straight from the west side of the Fallen Ruins of the Lake Site of Grace. Talk to Varre inside the church and by choosing the convo option of feeling uncomfortable, you'll receive 5 Festering Bloody Fingers.

Use the Festering Bloody Fingers that you received from Varre and invade other players' games. Regardless of whether you win or lose, you'll be able to proceed with the Questline as long as you invade thrice. With that said, you can also choose not to fight and use the Finger Severer to go back to your own game. After that, talk to Varre and choose the convo option of becoming a Knight to receive Lord of Blood's Favor.

It's Pointless To Use Other Items To Invade

You won't be able to proceed with this Questline if you use other invasion items like the Recusant Finger, etc. Also note that invading NPCs also won't count as an invasion required for this Questline.

With Elden Ring's online play, you'll be matched with other players that are near your own level. With that, the invasion location will change depending on your level. It's comparatively easier to invade during a holiday or weekend when more players are online, so aim to invade during those times.

Head to The Four Belfries from the Rose Church. There at the top you'll obtain the Imbued Sword Key, and use the Portal (Gateway) with the message "waiting for the king" to go to the Chapel of Anticipation.

Be Careful To Not Use Other Portals (Gateways)

Ther eare other Portals (Gateways) aside from the Chapel of Anticipation at The Four Belfries. If you mistakenly use a different one, being able to get the Imbued Sword Key will take much more effort. With that said, make sure to take the one that has the message "waiting for the king".

At the area where the game first started at the Chapel of Anticipation appears the boss Grafted Scion. If you get to defeat him and proceed, you'll be able to return to the game's starting point. From there, examine the Finger Maiden's corpse to obtain the Lord of Blood's Favor.

You Can Also Obtain Finger Maiden's Blood At Church Of Inhibition

Since this path is dangerous due to the Madness that occurs here, we don't recommend this route, but you can also obtain the Finger Maiden's blood here. If you're having a hard time battling with Grafted Scion, consider taking this route.

You Can Still Continue Even If You Kill The Finger Maiden

You can also obtain blood by killing Finger Maidens like Irina & Hyetta. However, doing so won't activate the NPC Questline, so we recommend going to the Chapel of Anticipation.

Go back to the Rose Church to talk to Varre and Blood Finger again to receive the Pureblood Knight's Medal. From this point, your character's eyes will become red.

You can change back to your original eye color and get rid of the red eyes by going to the Roundtable Hold's room where you can find Fia. Use the Dressing Table there to change your eye color by selecting: Detailed Appearance → Alter Face & Hair → Eyes → Eye Alternation (OFF).

You can automatically go to Mohgwyn Dynasty Mausoleum by using the Pureblood Knight's Medal. If it's your first time going there, make sure you get the Map Fragment by climbing the stairs right in front of you. After that, keep going up until you reach the Site of Grace Dynasty Mausoleum Midpoint. The enemies you encounter on the way will attack with the Hemorrhage status effect make it extra troublesome, so we recommend ignoring them by running past them.

How To Proceed Through The Cave

Proceed along the path until you get to the cave. This cave's diverging paths are extremely dark, and so we recommend using a Torch to light your way as you proceed.

If you go back a little way from the cave to the Site of Grace Dynasty Mausoleum Midpoint, you'll see a Summon Sign to invade Varre's world. You'll have to invade his world and beat him, so prepare for the battle before examining the Summon Sign. It's easy to get him angry, so we recommend attacking him consecutively for around 2-3 times to make him get mad.

Go back to your own world after beating him, and you'll find Varre fallen by the area of the invasion Summon Sign. Talk to him several times to obtain the weapon Varre's Bouquet & 6 Festering Bloody Fingers. This is where Varre's Questline ends.

※ Leave a comment down below if you were able to proceed via Offline Play!

Since the Varre Questline requires that you play online midway through the quest, there seems to be no way to proceed offline. We may be able to eventually do so after a future patch update, but at this point in time, let's just keep in mind that those who play exclusively offline won't be able to finish the Varre Questline.

What If Varre Gets Killed?

Cannot Continue Questline Until The Next Run

Since Varre is an NPC that most players encounter first in the game, many have reported accidentally killing him. This isn't particularly limited to Varre as it applies with all other NPCs, but in the event that you accidentally kill an NPC, you won't be able to continue their Questlines unless you do New Game Plus or starting the game over.

Avoid Killing & Go To Church Of Vows For Redemption