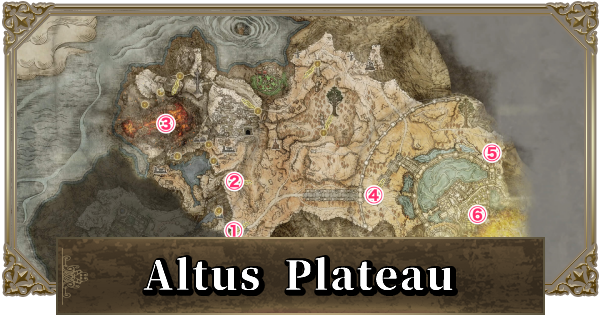 How To Get To Altus Plateau

The Grand Lift Of Dectus Route

You can get to the Altus Plateau by heading through the Grand Lift Of Dectus, which can be found at the northernmost part of Liurnia. You will need two halves of the Dectus Medallion to operate the elevator lift.

After defeating the boss in the Ruin-Strewn Precipice at the far end ofLiurnia, you can head up to the Altus Plateau from there. Since it takes a lot of time to clear the dungeon and defeat the boss, we recommend the Grand Lift Of Dectus route if you want to go there immediately.

Head To The Royal Capital And Subdue The Draconic Tree Sentinel

To head inside Leyndell, the Royal Capital, which can be found in the northeast, you will need to defeat the Draconic Tree Sentinel. This enemy can be really troublesome, so try upgrading your equipment and raising your level beforehand.

The map fragment can be found just by going north from the Grand Lift of Dectus. Use the stone monument as a landmark and be careful not to go too far.

The map fragment can be obtained by heading east and entering the Royal Capital. Soldiers will be waiting for you at the entrance of the Royal Capital, so be prepared to dodge their attacks or else you will lose HP in no time. It is recommended to ride the Spectral Steed to pass by them.

Go Around The Lava And Head Up

The location of the map fragment on Mt. Gelmir is a bit complicated. You won't be able to find the fragment by just heading straight ahead, so take a detour by going the long way around and heading up. Be careful when exploring the area since you will encounter multiple enemies and bosses.

When you exit the Grand Lift of Dectus, follow the road straight ahead and you will see the entrance to Leyndell. You will find a golden seed in the first area.

② In Front Of The Main Gate At Leyndell, Royal Capital

If you head further away from the outer wall phantom tree, you can find a golden seed. You can use the Spectral Steed to pass by the opponents along the way.

When you exit the Grand Lift of Dectus, follow the road straight ahead and head north upon seeing the fork in the road.

As soon as you exit the Grand Lift of Dectus, turn left and go straight. You can find it near the Erdtree-Gazing Hill Site Of Grace.

⑤ Near The Entrance Of Mt. Gelmir

From the Erdtree-Gazing Hill, climb up the narrow cliff and pass through the Wyndham Catacombs to reach the bottom of the cliff.

⑥ North Of Road Of Iniquity Site Of Grace

From the ⑤ Golden Seed location, follow the road and detour around the volcano to reach the Road of Iniquity.

The golden seed is located near the Minor Erdtree in the center of the Altus Plateau. You can easily find it by following the road near the Windmill Village Site of Grace and heading straight down.

After leaving the Grand Lift of Dectus, climb up the hill and go left. There you will find the Second Church Of Marika.

After exiting the Grand Lift of Dectus, continue straight down the road until you find a teleport device on a dead-end bridge that will take you to the other side of the river. Turn around to the right and head for the Stormcaller Church.