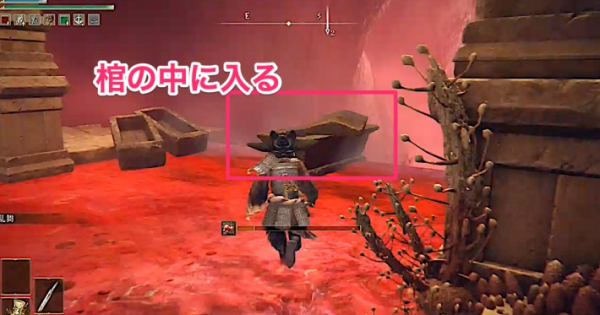 After the warp from Renna's Rise, follow the road south to reach Lake of Rot. At Nokstella, do not go inside the building, but go down into the river.

Video On How To Access from Ainsel River Main

Continue through Lake of Rot to the south and enter the coffin at the end of Grand Cloister, which will warp you to a space south of Lake of Rot. After proceeding, you will encounter the boss "Astel, Naturalborn of the Void".

▼Astel, Naturalborn Of The Void Guide

The Map Fragment of the "Lake of Rot" can be obtained from the corpse at the entrance, as long as you can reach the Site of Grace "Nokstella Waterfall Basin" from the Ainsel River Main.

How To Counter Rot Status

Bring As Many Preserving Boluses As You Can

The Lake of Rot causes the rot gauge to build up instantly, and once in Scarlet Rot status, the player suffers continuous damage until the gauge is removed. Since it is difficult to suppress the gauge buildup, it is recommended to use Preserving Boluses, which can remove the Servants Of Rot gauge.

Cookbook and Quick Guide to Where to Find Materials

※Check individual articles for detailed information on how to collect.

Use Flasks To Heal Your HP

Even though you are affected by the Scarlet Rot state, this does not mean that you will die instantly as the damage from your HP will decrease slowly. For that, you can set your flasks to all Flask of Crimson Tears and try to drink it from time to time until you reach the next Site Of Grace.

How To Raise The Bridge

Open The 5 Switches In The Area

There is a switch gimmick at Lake of Rot, and when stepped on, a bridge appears. There are five switches, four on the way from Lake of Rot to Grand Cloister and one near Dragonkin Soldier of Nokstella in the east. Stepping on the four switches will take you to a higher level. The scaffold near Dragonkin Soldier of Nokstella is for fighting to avoid Scarlet Rot status.

a non-boss Alabaster Lord will appear when you advance to a higher level and drop "Alabaster Lord's Sword" when you defeat him. The corpse at the far end will give you the Somber Smithing Stone [9], so don't forget to pick it up.

How To Reach The Next Site Of Grace

※The route will be taken with the switch mechanism activated and footholds appearing.
▼How To Raise The Bridge

Boss Location & How To Beat

※The route will be taken with the switch mechanism activated and footholds appearing.
▼How To Raise The Bridge

Use Bow To Defeat Them Easily

Be Aware Of The Bridge To Avoid Falling

Since you will be fighting on a narrow scaffold, it is more frightening to be blown up and fall to your death than to be damaged by the Alabaster Lord's attacks themselves. Check your footing, while trying to avoid all attacks.

Route To Servants Of Rot Spirit

The movement is the same as Ulcerated Tree Spirit, but Scarlet Rot Affinity has been added to the attack, so be prepared for Scarlet Rot by increasing Immunity resistance and preparing Preserving Boluses.

Route To Astel, Naturalborn of the Void