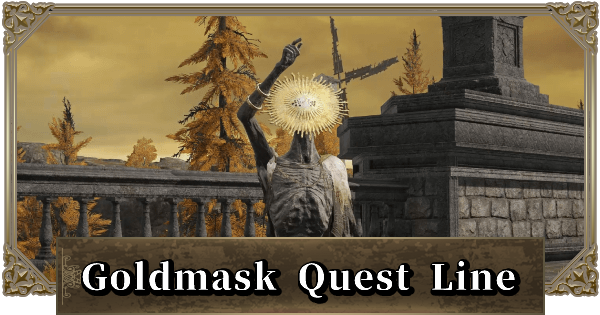 Goldmask Questline is an NPC quest in Elden Ring. See Gold Mask quest guide walkthrough & location, set ending, final location & lore, and what to do when corhyn is dead?

Goldmask's Quest Line is closely related to Corhyn's Quest Line. So much so that it's like one quest that progresses the story of 2 NPCs.

By meeting Corhyn at the Roundtable Hold first then finding him later at Altus Plateau, Goldmask's Quest Line will also progress.

Since the NPCs in the Roundtable Hold disappear after you defeat the Fire Giant and interact with Melina located at Forge of the Giants's Site of Grace, It will become impossible to do Corhyn and Goldmask's Quest Line. It is recommended that you continue with this quest and progress Corhyn's quest before going to the Forge of the Giants.

This Quest Line is directly involved to get one of the endings. If you don't want to be spoiled, it's best not to read the rest of this guide.

How To Get To The Altus Plateau

Follow the road from where Corhyn was and you will find a Site of Grace and a Portal (Gateway) on the collapsed bridge. Use the portal to get to the bridge on the other side and talk to Goldmask who can be found there.

You will need to proceed to Leyndell in the Royal Capital to progress through the Quest. The Quest Line occurs within Leyndell, Royal Capital so prioritize in gaining access to the area and defeating the boss there.

From Entering Leyndell To The End Of The Quest Line

Route To The Site Of Grace: Avenue Balcony

Route To The Site Of Grace: West Capital Rampart

From the Site of Grace: West Capital Rampart, proceed down the stairs and pass under a large tree. You will see an arena-like building at the top which you will need to climb. You can then find Corhyn and Goldmask on the cliff on the east side of the arena.

Route To The Golden Order Principia

Meet with Corhyn again and give him the Golden Order Principia. He will sell you the Law of Regression incantation which you should buy from him.

From the Site of Grace: Erdtree Sanctuary, follow the left road and take the lift down. There is an official message in front of the stone statue, equip the Sacred Seal and use the incantation. A new official message will appear.

Law Of Regression Is An Incantation That Requires INT

The Law of Regression is an incantation that requires 37 Intelligence to use. This makes it hard for other non-INT builds to use. You can temporarily increase your INT by reassigning your stats or with the use of equipment.

Return to Goldmask's location and talk to them. Answer that Radagon is Marika and you will get the Golden Order Totality Gesture. You will also hear a new story from Corhyn and the incantation Immutable Shield will be there for purchase.

How To Get To The Mountaintops Of The Giants

Having The Tonic Of Forgetfulness Adds Conversation

If you talk to Corhyn when you have the Tonic of Forgetfulness that you can get from the Volcano Manor quest line, you will get the option to Give the Tonic to him. It will not use up the Tonic and the rewards will remain the same, but Corhyn's comments will change.

Crumbling Farum Azula - Location & How To Get There

If You Gave The Tonic, Move To Next Location

If you gave the Tonic of Forgetfulness before, Corhyn will not be in this location because he will remain in the Mountaintops of the Giants. You can still progress with the quest line.

Further ahead from the location where Corhyn is, you will find Goldmask who is now dead. When you inspect his corpse, you will get the Mending Rune of Perfect Order and his equipment. Goldmask's quest line ends here.

With this, you will be able to choose the option to restore the Elden Ring with the Mending Rune of Perfect Order when you become the Elden Lord. This will change the ending!

Goldmask Helmet Can Be Found In Altus Plateau

Only the greaves, armor, and gauntlets can be looted from Goldmask's corpse. The helmet can be found at the edge of the collapsed brige after proceeding from the Site of Grace: Road of Inquity Side Path in Altus Plateau.