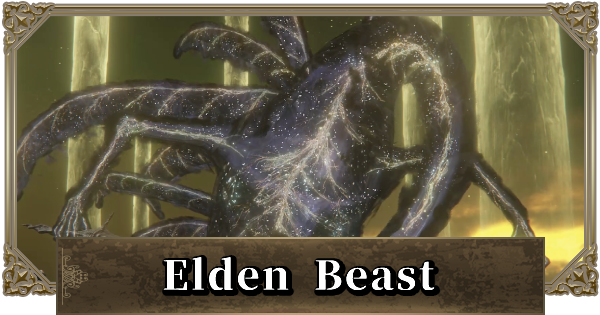 Altus Plateau (Leyndell, Ashen Capital At The End Of Story)

Appears in Leyndell, Ashen Capital at the end of the story. When Radagon of the Golden Order is defeated, the fight automatically begins.

Among Elden Beast's attacks, the ring, light sword barrage, and homing are Holy Affinity. These are difficult to avoid, but increasing the Holy Guarded Damage Negation can reduce the damage taken and lead to a more stable strategy.

Tap the icon for detailed information on how to obtain the product.

Even with equipment, HolyGuarded Damage Negation is increased, but it may not be possible to equip it due to Weight or it may have lower Physical resistance than it does now. Also, crystal drops have a short effect time, which is not compatible with Elden Beast, which tends to fight for long periods of time.

▲ You can also undertake dangerous attacks.

Elden Beast uses both tracking and wide-range attacks at the same time, so evasion alone is all you can do. If you have Spirit Ashes, you can summon them so that the aim will be distributed and not directly at you. You should call them when Elden Beast's attacks get more intense, if you want them to live longer below half HP.

Remove The Lock And Aim Behind

As is common with giant bosses, the camera tends to go haywire when in a locked state, and movement is not smooth. The Elden Beast's back is safe, so it is easier to stand behind it while it is unlocked.

At a distance, the Elden Beast emits a dangerous light blade. Since the attacks are not necessarily more intense at close range, it is recommended to fight as close as possible, even when safety is important.

Breath Leaves Or Retreats To His Back

Elden Beast's bracelets are property that spreads greatly from the position of the player. Therefore, once you confirm the activation, you should leave the area as soon as possible. If it turns on its back, it will have a chance to attack.

Shock Waves Are Easy To Avoid On Your Back

When the light bursts from the sword, a shock wave is generated from the piercing. It is very difficult to avoid within the range, but the attack is narrow behind the back. Always be wary of this technique and try to stand on your back as much as possible.

Avoid Light Sword Attacks, Even If Only The Last One

When you make the sword shine like burning, it pierces continuously. Ideally, you should avoid it at the same time, but the difficulty is high. The last shaving of high firepower has a long swing, so I want to be aware of avoiding this alone.

Continuous Avoidance Until The Second Shot Of The Light Blade

At long distances, use the technique of shooting four light blades. Since the firing interval from the first to the second shot is very short, let's avoid it by hitting the button repeatedly. If you hit somewhere, the avoidance pace will be disturbed and you will tend to hit continuously, so even if you hit it, do not rush and avoid the next.

When the beast of Elden Beast shines, countless light bullets emitted from the tentacles follow. If you keep running, you won't get hit, so try to recover some stamina at the time of the opening move. However, since other attacks will be made during the course, be prepared to be hit to some extent.

At 50% HP, The Pattern Increases

Below 50% HP, the pattern of jumping up from the surface of the water or releasing tracking bullets while sliding is also lifted. The point at which it emits light bullets from its tentacles while glowing remains the same, so run to avoid it when you see it.

If They Disappear, Leave-In A Hurry

When the Elden Beast disappears, the place will explode in a time delay. There is a preliminary movement in which the particles fly before they disappear, so if you do not miss this, you will be able to evacuate even at close range

Avoid The Ring By Jumping

▲ It is possible to dodge by rolling, but it is not recommended.

A halo that imitates a ring is generated at about 60% HP. If you hit it, it will stop moving and hit the explosion immediately after, so let's jump by jumping. When the HP of the Elden Beast reaches about 30%, the number of halos increases to three.

Elden Beast will fire light bullets that will track you at 50% HP. It is easy to escape by continuing to run, but the duration is unusually long, and other attacks will fly mercilessly during this time. Even for those who do not normally use ashes, we recommend that you use ashes to disperse the attack and surpass it.

Avoid Restraint Attacks According To Your Arm

▲ The shot motion is worth a look.

With HP 50% or less, the ban on restraint attacks of big moves is also lifted. There is a preliminary movement with a huge photosphere on the left hand. Avoid it according to the protrusion of the arm. It deals terrible damage, so try to keep your HP high so that you can hit it.