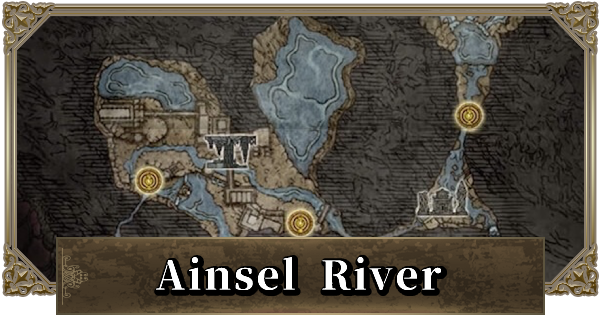 The dark areas in the map are sections you cannot access from Ainsel River.
Click on the icon to reveal details.

Getting off the Ainsel River Well

You Can Also Go From Deeproot Depths

The Map Fragment of Ainsel River can be obtained from a body in a building in the area past the dynastic ruins of Ur. The path from the well is long and the enemies are strong, so we should proceed while releasing the Site of Grace along the way.

Merchant Locations And Items for Sale

After descending from the Ainsel River Well and passing through the ruins of the dynasty of Ur, you will find a Merchant in a building in the area. There is also a Map Fragment of Ainsel River at the same location, so we should collect it as well.

Enemies appear in the ruins and will hurl rocks toward you from a distance. You can avoid rocks by hiding behind walls and pillars, so always watch out for shadows from incoming attacks as you search. They don't have any significant item drops when defeated and do not revive when you take a rest at the Site of Grace, so you can defeat them if they get in the way of your exploration.

▲ By climbing up the fallen pillars, you can reach the point where the attack can reach you.

Route To The Boss Battle

How To Defeat The Boss (Dragonkin Soldier of Nokstella)

Summon Spirit Ashes And Attack From Behind

Dragonkin Soldier of Nokstella mainly attacks from the front, so it is recommended to attack from behind using Spirit Ashes as bait. If you summon Spirit Ashes, which have a high attack performance in battle, they can be targeted for a longer period of time, allowing you to repeatedly attack consistently to beat the enemy.

A Long-Range Means Of Attack Is Preferable

▲ The weapon used in the image is Halo Scythe.

Dragonkin Soldier of Nokstella's attacks have a long reach, so if you have the means to attack from a distance, you can do damage safely and efficiently. Since the opponent does not have much HP, aim for a quick battle with a series of skill shots.

How To Get Valuable Items From Ainsel River

In the area where you fight the Dragonkin Soldier of Nokstella, a huge skeleton sits in a building that resembles a chair. A large wheel of lily of the valley in spirit form can be obtained from the coffin in this building.

▲ Click Here For The Route To The Boss Room