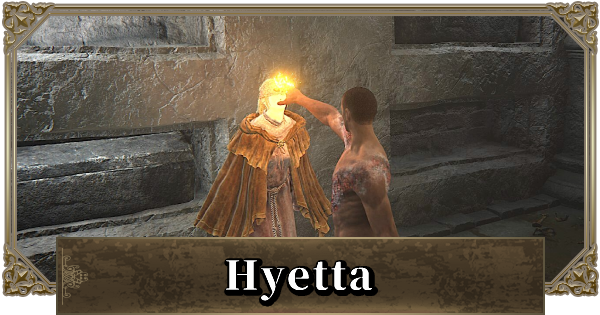 Hyetta Questline Guide For Elden Ring. See final location of Hyetta & Irina, what to do when Hyetta is not spawning at the ending, Bellum Church, 3rd & 4th location, & Walkthrough.

Speak with Hyetta at the Lake-Facing Cliffs Site of Grace in Liurnia and give her a Shabriri Grape to obtain the 'As You Wish' gesture. The first Shabriri Grape can be found in Stormveil Castle.

What To Do If Hyetta Doesn't Appear?

Hyetta will appear after Irina's Death (not by killing her), so try to complete her questline first. If you have not yet started her questline, visit Irina at the Bridge Of Sacrifice in Limgrave to initiate the quest.

The third Shabriri Grape can be obtained by defeating Edgar, the Revenger, who appears in the Revenger's Shack Site of Grace in Liurnia. In addition, you will also receive the Banished Knight's Halberd +8 weapon.

What To Do If Edgar Is Not Invading?

Note that if you haven't completed Edgar's questline at this point, he will not appear when you visit the Revenger's Shack. If he doesn't appear, go ahead and finish his questline first.

Give the Shabriri Grape to Hyetta at the Gate Town Bridge Site of Grace in Liurnia. Afterwards, select "They're human eyes" dialogue option, rest at the nearby Site of Grace and speak with her again.

The Fingerprint Grape can be obtained by defeating Festering Fingerprint Vyke, who appears a short distance down the hill from the Church Of Inhibition Site of Grace in Liurnia. In addition, you will also receive the Vyke's War Spear weapon.

Speak with Hyetta at the Bellum Church Site of Grace in Liurnia, and give her the Fingerprint Grape.

What To Do If Hyetta Is Not At Bellum Church

Speak with Hyetta at the Frenzied Flame Proscription Site of Grace in the basement of Leyndell, Royal (Ashen) Capital at Altus Plateau. She will then tell you how to open the door at the back.

How To Get To Frenzied Flame Proscription [Part 1]

Go from the Avenue Balcony Site of Grace to the Cathedral of the Forsaken.

After Leyndell has transformed into the Ashen Capital, the route to the Forsaken Depths will change. You can find the entrance when you see a large hole located slightly southwest of the Leyndell, Ashen Capital Site of Grace. The structure of the underground is the same as when it was the Royal Capital.

How To Get To Frenzied Flame Proscription [Part 2]

▲ There is a hidden passage to the Frenzied Flame Proscription behind the treasure chest.

The door at the back cannot be opened if you have armor equipped. If you unequip and open the door, a cutscene event will begin. After the cutscene, speak with Hyetta and select 'Touch Hyetta.' After the conversation, you will obtain the weapon Frenzied Flame Seal and Frenzyflame Stone.

Notes On The Flame Of Frenzy Ending

The Ending Will Change

If you have seen the Flame of Frenzy cutscene before the ending, the ending will change to the Lord of Frenzied Flame. There is a way to return to the normal ending, but be aware that you will have to go through various steps.

How To Avoid The Flame Of Frenzy Ending?

Use Miquella's Needle from the tools section of the inventory. You'll see an option, and if you choose yes, you'll be able to quench the Flame of Frenzy and proceed with other endings.

What To Do If Hyetta Is Not Spawning? - Hyetta Questline

If Hyetta Is Not At Lake-Facing Cliffs Site Of Grace

Proceed With Irina And Edgar's Questline

If Hyetta does not appear at the Lake-Facing Cliffs Site of Grace, then it is because Irina isn't dead yet. You will be able to see Hyetta once you have completed Irina's questline.

Hyetta Will Appear After Talking To Boc And Reloading

If Boc is near the Lake-Facing Cliffs Site of Grace, Hyetta will not appear. In this case, you will need to proceed with Boc's questline and then rest at a Site of Grace or by reloading to make Hyetta appear.

If Hyetta Is Not At Bellum Church Site Of Grace

▲ She'll say "I'm certain now. I will be a finger maiden." and moves to Bellum Church.

If she has not moved to the Bellum Church Site of Grace, you can most likely make her move by speaking to her again at the Gate Town Bridge Site of Grace. If you can't find it, follow the walkthrough chart above to check.