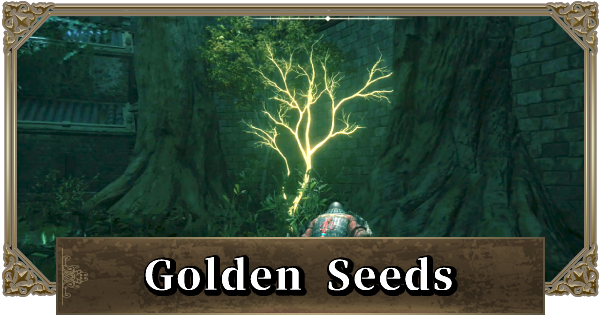 From the Site of Grace: Gatefront, pass through the large gates and follow the path to get to the small Haligtree. It's easy to find since it's right on the path from the Gatefront.

Proceed to the Site of Grace: Gatefront and head inside the delapidated shack there. Talk to the NPC Roderika. Have her move to the Roundtable Hold by either clearing Stormveil Castle or unlocking the Site of Grace in Liurnia. The Golden Seed will be where she use to sit.

You can find the tree where the Golden Seed is in the Dungeon: Stormveil Castle. You need to defeat the boss so it's quite a journey to get it.

The Fringefolk Hero's Grave can be accessed by using two Stonesword Keys to open the mist in the Stranded Graveyard. Defeat the Ulcerated Tree Spirit at the end of the dungeon to get the Golden Speed drop.

Found in the high ground in front of Castle Morne in the Weeping Peninsula south of Limgrave. If you're coming from The First Step, you have to go south to get it.

6. Front of Forth Haight

There is a Golden Seed in front of Fort Haight in the central east side of Limgrave. You have to go through the barricade in front of the fort and go to the front of the building.

Defeat the Ulcerated Tree Spirit in the undeground section of Stormveil Castle. The boss is somewhat hard to fight if you head there at early game so it's recommended to level up first and gather stronger equipment.

From the Site of Grace: Academy Gate Town, head to the direction of the central building. It is on the way to the Raya Lucaria Academy so you can pick it up on your way there.

It is located in the dungeon in Caria Manor. It is not far from the entrance so you can find it by going inside, up the stairs and out into the courtyard.

1. South Of The Site Of Grace: Southern Aeonia Swamp Bank

It is located at the end of Caelid road, southside. Head further south at the fork in the road.

Route A is easier if you can get there through the gate in front of Sellia, Town of Sorcery. You can also get there by going down to the Spiritspring near Fort Faroth and moving over the cliffs to the top of the buildings in the town.

3. Beyond The Farum Greatbridge

Go straight east on the upper side across the cliff and head north on Farum Greatbridge. There is a dragon waiting to fight you on the bridge so it's recommended to do this on your mount.

After leaving the Grand Lift of Dectus, follow the road straight ahead and you will see the entrance to Leyndell. The Golden Seed is just near the entrance.

2. Leyndell, In Front Of The Main Gate Of The Royal Capital

From the Site of Grace: Outer Wall Phantom Tree, go southeast and you can find the Golden Seed. Enemies along the way can be passed without fighting by riding through on your Horse.

3. North Of The Grand Lift Of Dectus

It can be found by going forward from the Grand Lift of Dectus then taking the road further north.

As soon as you exit the Grand Lift of Dectus, face north and go straight. It's near the Site of Grace: Erdtree-Gazing Hill.

5. Near The Entrance To The Volcano Manor

From the Site of Grace: Erdtree-Gazing Hill, climb up the narrow cliff to the higher ground. Follow the cliff through Wyndham Ruins to the bottom of the cliff.

6. North Of The Site Of Grace: Road Of Inquity

You can get there by following the road from the Golden Seed location near the entrance of the Volcano Manor. Bypass the Volcano and continue heading up.

7. Near The Small Erdtree

There is a Golden Seed near the small Erdtree in the center of Altus Plateau. You can easily find it by following the road down from the Site of Grace: Windmill Village and going down.

The Golden Seed is on the east side of Windmill Village. If you have unlocked the Site of Grace: Windmill Village, continue on the road toward Leyndell. leave as soon as you get the seed because there are stone throwers in the area.

There is an encampment at the location in the image above. An Ulcerated Tree Spirit will appear when get to the location. Defeat the enemy and obtain the Golden Seed.

10. South Of The Site Of Grace: West Capital Rampart

Exit the Site of Grace: West Capital Rampart in Leyndell, Royal Capital to the south corridor. You will find a huge enemy and a smaller white one holding an instrument there so make sure you're ready to fight.

Enter Leyndell, Royal Capital and defeat the Ulcerated Tree Spirit that appears in a nearby location. This is near the Site of Grace: Avenue Balcony.

Click to Enlarge
Mountaintops Of The Giants Map & Location Guide

1. South Of The Grand Lift Of Hold

Head straight down the road after leaving the Royal Capital, Leyndell. You will find the Golden Seed about halfway up the hillside. Continue north and you will reach the Grand Lift of Rold.

The Golden Seed can be obtained by defeating the Ulcerated Tree Spirit at the far end of the Giant's Mountaintop Catacombs located east from Site of Grace: Zamur Ruins. It is a powerful boss so be prepared for the fight.

How To Get To The Giant's Mountaintop Catacombs

The Golden Seed is located northeast up from the Site of Grace: Foot of the Forge. Be careful because there are large enemies that throw pots in the area.

4. Northeast From The Site Of Grace: Consecrated Snowfield

5. West From The Ordina Liturgical Town

6. South Of The Site Of Grace: Freezing Lake

There is a Golden Seed in the hollow valley south of the Freezing Lake. If you have not unlocked the Site of Grace: Freeezing Lake, go around from te valley area of the old ruins and go through the river.

The Golden Seed drops from the Ulcerated Tree Spirit, which is located at the end of the tree branch after climbing the ladder from the Site of Grace: Drainage Channel. The area is surrounded by Servants Of Rot, making it difficult to fight. It is possible to defeat them by attacking them from high above the branch.

8. Southeast Of The Site Of Grace: Dragon Temple Lift

Start from the Site of Grace: Dragon Temple Lift in the Crumbling Farum Azula and up the top in front of the building. There are a large number of enemies around, so it's recommended to leave as soon as you get the Golden Seed.

9. Southeast Of The Site Of Grace: Dragon Temple Rooftop

From the Site of Grace: Dragon Temple Rooftop in Crumbling Farum Azula, head down through the roof and the Golden Seed can be found in the center of the area surrounded by pillars.

Site of Grace: Below The Well

It is located just after crossing the bridge southwest from the Site of Grace: Below The Well. While travelling across the bridge, it is easy to be shot by enemies so use your horse to get through there fast.

High Ground Off The Far End Of Nokstella, Eternal City

From the Site of Grace: Nokstella, Eternal City, proceed through the buildings until you get to the innermost part. Head down the side of the innermost building and use the Lift down to find the Golden Seed.

Route Guide To The Golden Seed

In The Swamp Near The Site Of Grace: Palace Approach Ledge-Road

The Map Fragment of the Mohgwyn Dynasty Mausoleum is located in the swampy area off the Site of Grace: Palace Approach Ledge-Road and go around the left. The enemies here are strong so it's recommended to leave as soon as you collect the Golden Seed.

Defeat te Servant Of Rot Tree Spirit At The End Of The Descent From The Site Of Grace: Grand Cloister

Head down from the Site Of Grace: Grand Cloister and cross the Scarlet Rot River to the waterfall at its end. There will be Servant of Rot tree spirit there that when you defeat will drop the Golden Seed.

How To Use The Golden Seed

Increase The Number Of Flask Uses At Sites Of Grace

Required Number Of Golden Seed Per Flask Use Upgrade

Can Be Upgraded Up To 14 Times

The highest upgrade for the Flasks is 14. The amount of use for the Flasks cannot be increased beyond that. Since there are a lot of Golden Seeds, it's easy to achieve this.