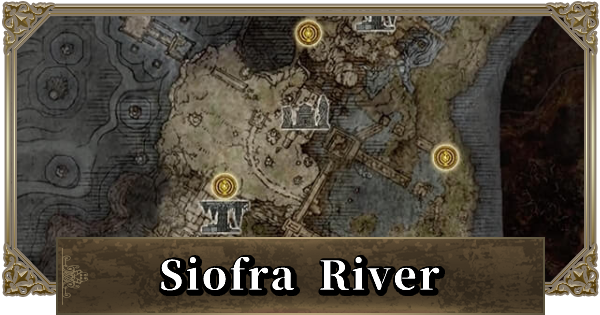 ※The dark area is an area that cannot be reached from Siofra River Well.
Click the icon for details.

Getting off the Siofra River Well

Areas That Cannot Be Reached Are From Nokron, Eternal City

You can switch between the upper ground and under ground maps with the buttons. If you have trouble changing the map when you first move underground, check the bottom of the screen and use the buttons to switch.

Obtained From Corpse In The Hallowhorn Grounds

The Map Fragment of Siofra River can be obtained from the corpse in front of the cemetery of the Hallowhorn Grounds; just go from Site of Grace's Siofra River Bank in the direction of the building.

After exiting at the Siofra River Bank, continue in a northerly direction and cross a narrow bridge to a high point. It is recommended to go in a zigzag motion as it is easy to be hit by enemy attacks that shoot arrows.

Merchant Locations And Items For Sale In Siofra River

Inside The Building West Of The Worshippers' Woods

Merchant is in the building that can be reached by a ladder from the west of the Site of Grace's Worshippers' Woods. Don't forget to buy the Larval Tear since it is necessary for Rebirth or Respec.

Site Of Grace Location And Route To The Boss

Route to Site of Grace Below The Well

Route to the boss Ancestor Spirit

You need to light the candlestick

In order to fight Ancestor Spirit, all the candelabras in Siofra River must be lit. If you haven't done so yet, find the candlesticks first.

▼Click here to see the location of the candelabras

Route to the boss Dragonkin Soldier of Nokstella

Location of the candelabra that lights the Ancestor Spirit fire

There is a pedestal (candlestick) in Siofra River, and when all the candlesticks are lit, you can go to the battle place with Ancestor Spirit at the spirit site of the wreckage of the horns.

Location Of The Pedestal (Candelabra)

How to get valuable items

※Here are particularly useful items you might get on the way

Where To Use Stonesword Key And What Items To Get

Activate Lift and go up to Caelid. There is a Site of Grace nearby, so let's liberate it.

Proceeding onward, you will find two bow giants. It is best to defeat them first, as they will get in the way during the mandatory battle that follows.

Go further in and summon the Competitive from the three summon Summon Signs in front of the building with the big Jar; if you defeat a total of three Knights of the Cauldron, one at a time, you will get the Great-Jar's Arsenal.

Directions From Site Of Grace To the Summon Sign Location

Before The Collapsed Bridge Southwest Of The Siofra River

In the Ranni Questline, Blaidd, a half wolf, is moving to the southwest of the Site of Grace Siofra River Bank in front of a collapsed bridge, which can be reached in a straight line.