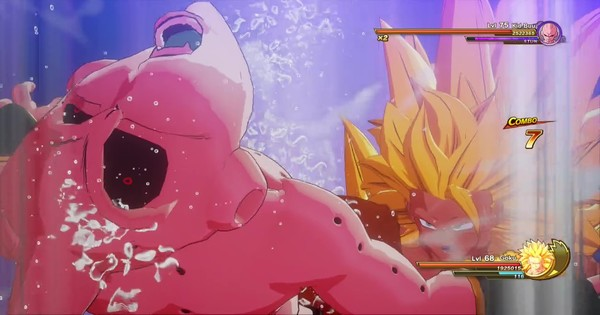 Read this Dragon Ball Z Kakarot guide to find out how to beat Kid Buu. Get tips on best methods to win, how to counter its special attacks and beat Kid Boo fast in DBZ Kakarot!

You will fight Kid Buu 4 times, twice as Goku and twice as Vegeta. Kid Buu's attack patterns and strategy remain somewhat consistent throughout the fight.

Focus On Evasion And Burst Damage

Kid Buu will have many high-damaging phases that makes it almost impossible to attack, and phases which he is totally vulnerable. The key to victory is evasion, and burst damage during the attack window

Move Away And Evade When He Says "Gya gya"

Kid Buu will have go into a highly aggressive phase as he "Gya gyas", where attacking him is unfeasible due to the density of his attacks. Focus solely on dodging his many attacks and forget about attacking him for now.

Out Of Breath After "Gya gya"

After Kid Buu throws his Planet Burst, he will become exhausted and is open to attack. This is the best time to strike!

Scissors Paper Rock: Rock Is Your Staple Attack For Goku

Scissors Paper Rock: Rock deals high burst damage as well as stun effect, allowing you to deliver more attacks in the attack window. Beat him using melee attacks and then finally chain it with Meteor Smash will also results in more damage.

2 Scissors Paper Rock will put an end to Kid Buu's Kamehameha yellow bar. Make sure you have enough Ki to do it twice for the chance to deal massive free damage.

Massive Strike For When Using Vegeta

When fighting as Vegeta, Massive Strike is you best burst damage source against Kid Buu since you can chain it for some massive damage combos. It makes up for the inability to stun for Follow-Ups that can paste Kid Buu to the floor.

A lunging attack after charging up. Avoid the red line targeting you, or use defend to trade some HP for an opening.

Turns you into a helpless candy when struct. Dodge the beam when it's about to fire.

Ray attack. Dodge to the sides as he prepare to fire it.

An ultra wide attack that signals the end of the "Gya Gya" phase. Super boost to the edge of map. After he used this, he will become exhausted and open to attack.

How To Dodge Planet Burst

Press R1 to initiate a Super Boost and run in one direction to the edge of map. The borders will be apparent when you get close.

Homing barrage of Ki attacks with a final big Ki ball at the end. Dodge or Super Boost to the sides to avoid.