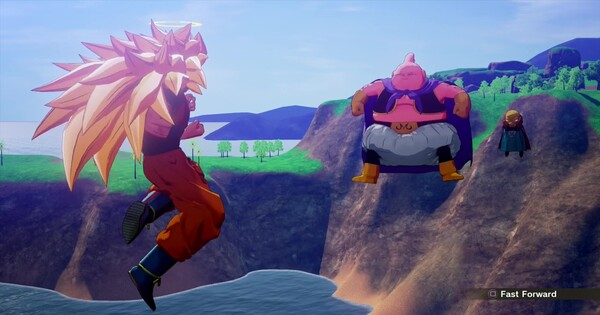 Read this Dragon Ball Z Kakarot guide to find out how to beat Majin Buu. Get tips on best methods to win, how to counter its special attacks and beat Majin Boo fast in DBZ Kakarot!

There will be 3 fights with Majin Buu, in the order of Gohan, Vegeta, and Goku. Many fighters will not be able to stem this pink disaster.

Same Tactics Apply For All Fights

The moves and attack patterns of Majin Buu will hardly change at all between fights, meaning that the same tactic can be employed to take him down fast.

Using the Melee Special Attacks will quickly deplete Majin Buu's Stun gauge and break his guard, allowing you to even take away a whole life bar from him.

Use Your Defend & Counters

Majin Buu relies mainly on hard-striking melee attacks & Megaton Bomb to cause damage. If you do not use your defend effectively, you will be outdamaged by him. Also, use your counters to get an upper hand and do some combos of your own.

Transformation (L2 + R2) will provide a solid boost to your damage, at the cost of draining Ki. As you will be focused on melee, Ki drain is no issue, so don't forget to Transform!

Charges up a Ki Ball attack. Avoid it by dodging to the sides when it is thrown. Throws 3 when fighting Vegeta.

Erupts in a large energy blast, causing damage and knock back. Defend is a good tactic as it is hard to dodge.

Powerful frontal punch. Defend or dodge when Majin Buu pulls back his fist to punch.

Frontal beam that turns you into candy, disabling movement and actions. Usually followed by a Megaton Ball. Dodge sideways away from the red line.

this has helped me and i am now in the battle of gods saga THANKS A LOT :)