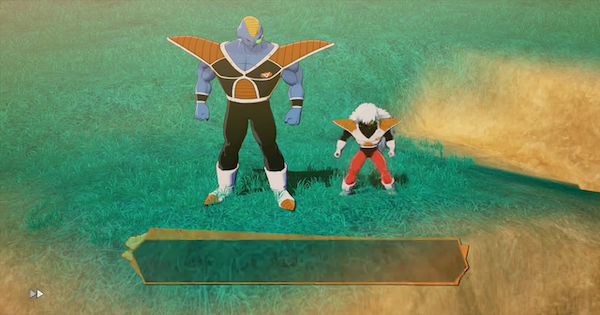 Read this Dragon Ball Z Kakarot guide to find out how to beat Burter and Jeice. Get tips on Mach Kick, Crusher Ball, and Sonic Slash & their counters in DBZ Kakarot!

How To Beat Burter - Tips & Strategy

Burter is the third member of the Ginyu Force that you will fight. He is accompanied by Jeice in the background during this battle.

Use Recovery Items If Necessary

These two bosses are part of a gauntlet, so if you lose here you'll have to start over from Recoome! Use items without hesitation if it prevents you from dying!

How To Recover HP

Burter doesn't really have any major destructive special abilities, so most of the damage you'll take will probably be from his melee attacks. As such, make sure you guard and dodge appropriately. In general, try to stay above him so you don't get struck by Mach Kick.

The Mach Kick is a downward kick which Burter performs when he's above you.

Burter moves forward and then suddenly teleports behind you, hitting you from behind.

Jeice will fire out an orb of damage along the line he indicates beforehand. Simply keep moving to avoid this.

How To Beat Jeice - Tips & Strategy

This is the first time you fight Jeice in this game. He will also appear in a later fight. Both fights are in the Frieza Saga.

Unlike Burter, Jeice's physical moves aren't as dangerous. He also should be at relatively low health, so as long you avoid his Crusher Ball, you won't be at risk of taking much damage. Use melee moves and move out if you anticipate a Meteor Crusher to take him out.

Just like in the previous fight, Jeice will fire out an orb of damage along the line he indicates beforehand.

Jeice slams down on you from above with great force and deals damage.