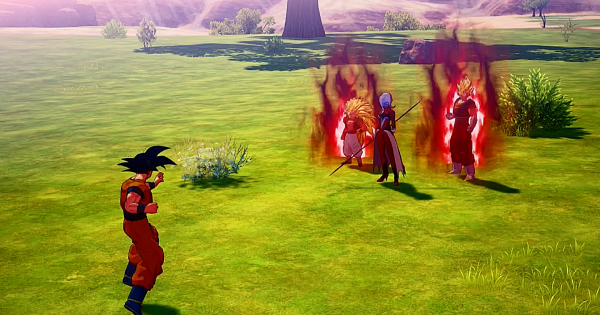 How To Unlock Vegito & Gotenks Fight

The fight between Vegito & Gotenks will only appear once you've defeated all Villainous enemies in the game.

Check Out How To Find Villainous Enemies!

Fighting and defeating Vegito & Gotenks will unlock the game's secret boss. This is the only way to unlock this fight.

Check Out How To Unlock Secret Boss!

Level Up Before The Fight

Vegito and Gotenks will be at Level 100 in this fight. Make sure that you've leveled up enough and also unlocked powerful Super Attacks to fight these foes.

Check Out How To Level Up Fast!

Level Up Mastery Skills Too

These foes are very tough to take down so make sure the Support Characters you bring are also at the same power level as you.

You'll be fighting two strong enemies at once so focus fire on one before downing the other. Gotenks has lower HP than Vegito so bring him down first.

Using Super Attack Assists will deal much more damage to whoever you're facing in the fight so be sure to utilize them when available.

Vegito summons a controllable energy beam from his hand which we will use as a makeshift sword. He'll do several diagonal slashes that deal heavy damage so make sure to guard.

Vegito will shoot out a volley of energy balls that will come towards you in a half circle. Dodge to the side to avoid getting hit by the barrage of energy balls.

Vegito's Kamehameha will have a wide range but will shoot forward. Make sure to dodge to the left or right to keep from taking too much damage.

Vegito will form a powerful energy sphere that he'll launch towards you to create a big explosion. This can be hard to dodge so make sure to keep your guard up.

When Gotenks does his Galactic Donuts and you're caught in the energy rings, Vegito will go into his Big Bang Attack. This makes this move one of the hardest to avoid in the fight.

Gotenks will send glowing rings towards you. If hit, you'll be bound by these rings until they disappear. Phase out & keep mobile to avoid getting shackled.

Gotenks expels a ghost-like figure from his mouth that will home in towards you. It will explode upon contact. Keep moving to avoid the specter.

Where are they at?