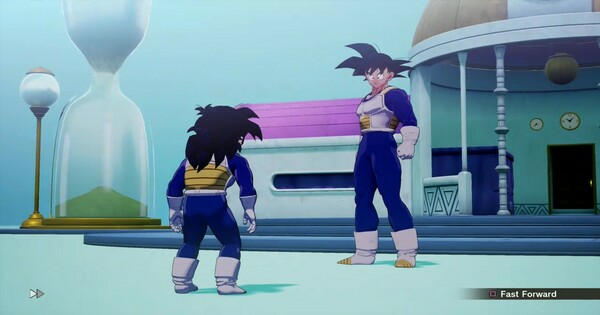 Read this Dragon Ball Z Kakarot guide to find out how to beat Goku. Get tips on best methods to win, how to counter Goku's special attacks and beat Goku fast in DBZ Kakarot!

How To Beat Goku - Tips & Strategy

You will fight Goku once in this fight. It is Gohan's training to becoming a Super Saiyan with his father Goku.

Do Not Be Overly Aggressive And You'll Be Fine

Goku's attack patterns will severely punish any player that don't know when to disengage, as his Ultimate Scissors Paper Rock combo will be hard to evade for those close enough when Goku uses it.

The main source of damage from Goku is his Ultimate Scissors Paper Rock Combo: He will strike 3 times separately, followed up by a Super Kamehameha, causing massive damage. This attack may also stun, so make sure to be miles away when he uses it.

A 3-strike attack rolled into one. This move will strike 3 times separately meaning that you will need to evade all 3 attacks to get away from this combo. Scissors will stun you if it hits, leaving you vulnerable to follow-up attacks,

A guided version of Kamehameha that has a tracking trajectory. Evade just as any other ray attacks, but require more dashes to successfully be safe. Usually used after Ultimate Scissors Paper Rock to blast chunks of HP from you while you're stunned.

A more damaging version of the Kamehameha. Dash to the sides to avoid taking heavy damage. Usually used after Ultimate Scissors Paper Rock to blast a huge chunk of HP from you while you're stunned.

Dashes forward in a blue aura, then waiting for a while before releasing a heavy punch. Dash away as Goku stops to punch, or defend.

Dash forward and so a pummeling smash, knocking you down if hit. This move has a big opening so just keep stepping back.