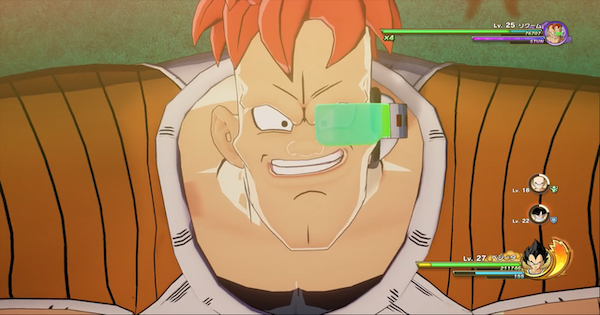 Read this Dragon Ball Z Kakarot guide to find out how to beat Recoome. Get tips on his Grenade Bomber, Eraser Gun, Kick & their counters in DBZ Kakarot!

How To Beat Recoome - Tips & Strategy

You will fight Recoome two times in the Freiza Saga. First you'll be Vegeta, and the second time Goku. His abilities are essentially the same, but he'll be stronger in the second battle.

The second fight with Recoome (as Goku) will lead into the Burter/Jeice consecutive boss fights where you can't recover your health. It's important to take absolutely as little damage as possible during this fight!

Always be ready to react to Recoome's Eraser Gun sweep. When he uses this ability, immediately start moving sideways to get out of the affected area.

As with many other previous bosses, Recoome has a counter kick which will knock you back and stun you. Try to avoid staying up close to him for extended periods of time.

Recoome draws a red line in front of him indicating where he'll move. He then lunges forward and kicks you, dealing large damage. As usual, this requires good dodge timing.

Recoome's Eraser Gun will fire out a laser beam in front of him, dealing damage in a line.

This version of the Eraser Gun will have the beam pan from one side to the other, covering a rather large area. The red area indicates its total range.

Part two of this move will have Recoome jump up and rain fire down upon you. Thin red lines will mark the locations where fireballs will drop.