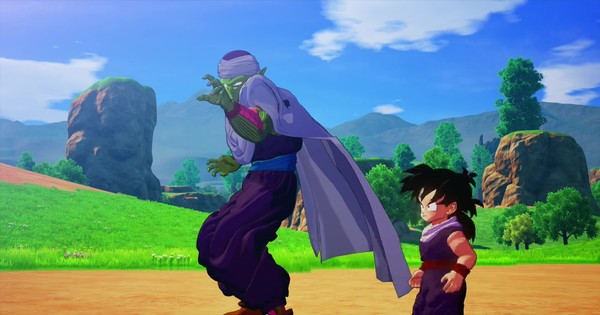 Read this Dragon Ball Z Kakarot guide to find out how to beat Piccolo And Gohan. Get tips on best methods to win, how to counter Piccolo And Gohan's special attacks and beat them fast in DBZ Kakarot!

How To Beat Piccolo And Gohan - Tips & Strategy

You'll be facing off Piccolo and Gohan at the same time, as training for the impeding Android threat.

Heal All HP Losses Before Talking To The Duo

Goku's health will not be maxed and healed for this battle! Any damage from mobs along the way will not auto-recover. You must manually heal Goku's health before talking to the duo!

Use Items Such As Vitadrink For Healing HP

Purchase Vitadrink from shops in West City and max Goku's HP before facing off the Piccolo And Gohan. Eating food will not heal you.

How To Recover HP

The key of this battle is to focus only on 1 target until he's fully defeated before turning your attention to another. No matter who you focus on first, the other's attack patterns are mostly the same - the ranged support.

Ignore The Ranged Attacks When Focusing

The support character will shoot Ki balls and occasional linear beam attacks, but since the damage is low, do not change your focused target at this time. Focus on bringing one opponent down first.

Take Out Piccolo First As He Is Harder

Piccolo has some solid melee moves and hits harder than Gohan. Taking him out while you have more HP may be desired, so focus on him first.

Stick close your target and try to engage with martial arts. You'll need the additional damage to Out-DPS 2 opponents, and If you distance yourself from target too much, you'll catch flak from 2 sides, making it harder to dodge.

Transformation (L2 + R2 ) will provide a solid boost to your damage, at the cost of draining Ki. As you will be focused on melee, Ki drain is no issue, so don't forget to Transform!

Piccolo will charge up for a bit and unleash an explosive energy around him. Pull back from him immediately or defend.

A red arrow appears, followed by Piccolo's lunge attack. Avoid like any line attacks or defend.

Piccolo charges up for a line attack. Dash to the sides to avoid getting hit.

Gohan's beam attack. Will charge up before firing. Dash to the sides to avoid.

Gohan dashes around until finally stopping to release a stunning strike. Dash away as Gohan reappears for the punch.