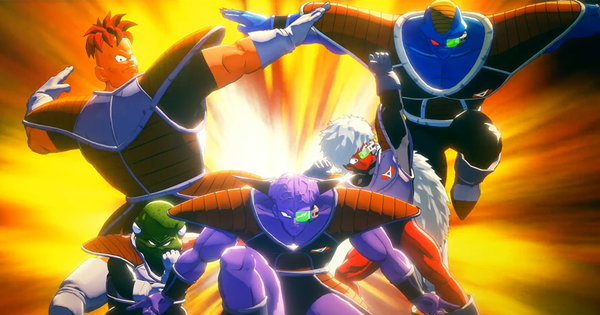 Dragon Ball Z: Kakarot | DBZ Kakarot
How Many Sagas Will DBZ Kakarot Include?

Read this guide about Dragon Ball Z: Kakarot's (DBZ Kakarot) stories that you will be able to experience. From Saiyan, Frieza, Android and Majin-Buu story lines (saga) has been broken down in details, also background information on enemies that you will be facing in each saga

How Many Sagas Will DBZ Kakarot Include?

The game is based on 4 sagas following the original manga. You will be able to experience the Dragon Ball World as you play the character Goku and defeat his biggest enemies.

5 years after battle with Piccolo; Goku is now married with Chichi and they have a son named Son Gohan. One day, a Saiyan arrives stating he is the brother of Goku. He suggests joining allies with Goku to attack other planets, but Goku denies. Raditz takes Gohan as hostage and flees. Piccolo arrives and joins teams with Goku to defeat their same enemy.

Saiyan warrior and older brother of Goku. He looks very similar to Goku, but their personality differs greatly as he is more calm and destructive.

An elite Saiyan warrior who has a special power to defeat all Z warriors who is on planet Earth.

The prince of the planet of the Saiyans, Vegeta. He arrives after the notice received from Raditz regarding the Dragon Balls that have landed on Earth.

The leader of the Frieza clan, he is smaller built and very flexible, and at first he does not have a intense impression. But he has destroyed the Saiyan planet and the Vegeta planet.

There has been continuous days of peace on Earth. But suddenly, Frieza arrives on Earth with his father, King Cold. Gohan and the crew feels the end of the Earth is coming, but then a boy with a sword on his back faces the Frieza combo. The boy turns into Super Saiyan and defeats Frieza and the King.

The boy introduces himself to Goku as the son of Bulma and Vegeta, and he has came from the 3 year future to defeat the Androids who is later coming to Earth.

An android created by Doctor Gero to defeat Goku. He is a creation from the genes of Vegeta and Frieza, and other Saiyans that has came on Earth. He arrives on Earth riding on Trunks Time Machine.

7 years after the battle with Cell, Gohan is now 16 years old. Attending highschool at Satan City, he wears a transformation suit and becomes Great Saiya Man and goes out into the city to defeat villians. But he is quickly revealed by classmate, Videl, the daughter of Mister Satan. To keep his secrete, he attends the the World Martial Arts Tournament.

The Z crew then learns that Goku will be coming from the after life to attend the tournament as well. They team up to start training, but little did they know the evil minds of Babidi is trying to revive the Majin-Buu.

A creation made by the Warlock Bibidi, he has destroyed hundreds of planets and killed many in the far past. He was sealed away by Bibidi himself, but his son, Babidi, used a full amount of energy to bring the Majin back to Earth.

Pure Majin-Buu or Kid Buu, is the "evil" that has been sealed within the "good" of Buu. Once the "good" has been taken away, the original Pure Buu has been revealed. The opposite of the original Buu, the Pure Buu is very viscous and attacks freely as its emotions take him and destroys everything in his way.