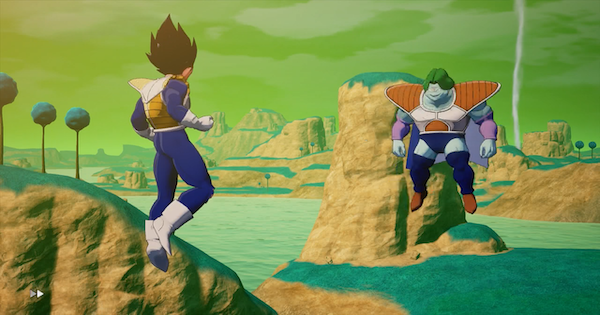 Read this Dragon Ball Z Kakarot guide to find out how to beat Zarbon. Get tips on his Shooting Star Arrow, Wild Blaster, Bloody Dance & counters in DBZ Kakarot!

How To Beat Zarbon - Tips & Strategy

You will fight Zarbon two times in the Freiza Saga, both times as Vegeta. His abilities are the same, but he'll be tougher the second time you fight him!

Some of Zarbon's moves are easier to dodge than others. You might struggle to dodge the Grab, so make sure you take as little damage as possible from other sources. Wild Blaster and Wild Headbutt especially should be dodged every time.

Use Galick Gun Between Moves

In between Zarbon's abilities, try to get in as many Galick Guns as you can. This ability is quite powerful and will deal massive damage, so use it liberally.

This is Zarbon's flashiest ability. After a brief animation, orbs will rain down from the sky toward you. Move out of the way to avoid them. This move has two parts!

This grab is the second part of Shooting Star Arrow. He will fly towards you at high speed during the star barrage and grab you, dealing damage. Fly far away from him until the barrage finishes.

Zarbon shoots a beam of energy forward. Simply move out of the way.

When fighting in close quarters for longer periods of time Zarbon will knock you back forcefully with a roundhouse kick. Avoid over-committing to melee attacks.

A red line indicator will appear in front of Zarbon and he will charge in that direction after a few moments. Time your dodge carefully and avoid this.

Zarbon approaches you and fires off a flurry of fiery kicks. Guard through this or dodge it if you can.