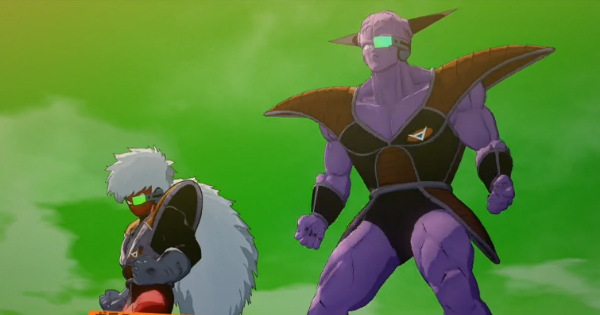 [Important!] 2: Avoid Getting Damages During The Battle

You will need to continuously fight other members of the Ginyu Force after the battle. So try not get too much damage and keep HP as much as possible to comfortably fight the next bosses!

3: Three bosses In A Row

Burter is the third member of the Ginyu Force you'll fight. He is accompanied by Jeice in the background during this battle.

The second fight with Racoome (as Goku) will lead into the Burter/Jeice consecutive boss fights where you can't recover your health. It's important to take absolutely as little damage as possible during this fight!

Always be ready to react to Racoome's Eraser Gun sweep. When he uses this ability, immediately start moving sideways to get out of the affected area.

As with many other previous bosses, Racoome has a counter kick which will knock you back and stun you. Try to avoid staying up close to him for extended periods of time.

Use Recovery Items If Necessary

These two bosses are part of a gauntlet, so if you lose here you'll have to start over from Recoome! Use items without hesitation if it prevents you from dying!

Burter doesn't really have any major destructive special abilities, so most of the damage you'll take will probably be from his melee attacks. As such, make sure you guard and dodge appropriately. In general, try to stay above him so you don't get struck by Mach Kick.

When You Always Get Defeated

Back to the previous save point and restart from Recoome battle. In Recoome battle, avoid getting hit so that you can fight Burter & Jeice in an easier condition.

This is the first time you fight Jeice in this game. He will also appear in a later fight. Both fights are in the Frieza Saga.

Unlike Burter, Jeice's physical moves aren't as dangerous. He also should be at relatively low health, so as long you avoid his Crusher Ball, you won't be at risk of taking much damage. Use melee moves and move out if you anticipate a Meteor Crusher to take him out.

2 Battles For The Fight, One With Goku's Body

Will Not Use Goku Moves

Ginyu will not be using any Goku's moves, instead will be using his own moves & attack patterns, so deal with him accordingly.

Focus On Finishing Off Jeice First

Jeice is weaker and will use many Ki-attacks throughout the fight which will cause mini-stuns, disrupting your tempo. Finish him off first for less interruptions.

Ginyu & Jeice has pretty straight-forward attack patterns that are easy to read, as they often require charging. Their only advantage is in numbers, so focusing on picking one off first.

Kamehameha Is Effective Against The Pair

When fighting Ginyu & Jeice, Kamehameha is highly effective due to their attack patterns leaving many openings. Kamehameha's fast attack animations and stuttering effects can speed up the battle considerably.