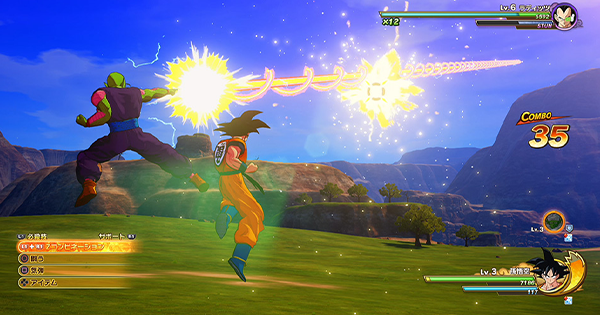 Read this guide about Dragon Ball Z: Kakarot or DBZ Kakarot's battle system guides. Each battle techniques and moves have been listed out for an easier startup of the game.

There will be 3 main battling techniques that you will acquire within the game. Basic Moves, Techniques, and Defense/Counter Moves; let's look into them in further detail.

Starting with Basic Moves, you will be able to enjoy the original Dragon Ball Z skills in real life. They are broken down into 3 parts, which include some famous special attacks.

These are simple attack moves to defeat your foe without using too much of your energy while in battle.

Ki Blast moves use more energy than your simple attack moves, but they will deal more damage to your foe.

Of course we cannot forget about special attacks such as the famous Kamehameha. Special Attacks do use a lot of your energy, so watch carefully where you can step away to reboot your energy.

Don't be satisfied with just the Basic Moves. There are other "techniques" in winning a battle.

While fighting, try lowering your foe's stun gauge so they will not be able to move for a certain period of time. Also if you use your special attack during this time, a special attack animation will be played while using this move.

Surge during battle will allow you to power up. This will activate and allow you to use the special attack move consecutively.

If you are in battle with a support member, you will be able to use the Special Support Move that each character has to offer.

After using the support skill several times, it will load up your gauge. Once this gauge is filled, you will be able to use the Z Combination to deal great damage to your enemies.

You will not be able to win with just attacking your foe. Of course you'll also have to defend yourself and counter attacks as well. The key in winning is to try avoiding getting hit and losing energy.

Avoid your foe's special attack moves with Boost. Use this when to dodge continuous attacks.

When you Step away from your foe, the game will enter slow motion for a short period of time where you can see yourself defend from the attack.

While guarding yourself, you will be able to use the Burst move to blow your foe away from you .

Once you go around your foe and are able to attack, you can use the Vanish Attack.

Use Z Orbs To Unlock Moves

Collect Z Orbs during free roam and save them up to unlock or upgrade new moves. Note that moves might require you to consume different types of Z Orbs, so get collecting!

Check Out How To Unlock Skills & Moves Here!

Slot New Moves In The Palette

Remember to slot in new learned moves in the palette! Moves need to be in the palette in order for you to be able to use them in battle.