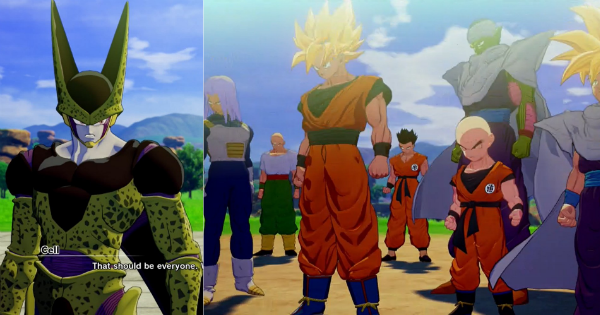 This mission is pretty straightforward. You only need to fast travel to the Cell Games Arena in the midst area on the World Map.

3: Power Up Skills Before Meeting Cell

As a prep, go to skill tree and power up Z fighter's skills. It would be easier to defeat cell if you do so.

When you are ready for the final battle with Cell, go to the Cell Arena to meet him.

Check your Goku's Lvl is competitive compared to that of Cell. With higher Level + Super Attacks, it would be a lot easier to defeat Perfect Cell.

There is no other option than talking to Gohan to progress the story here.

Make sure Gohan's level and Super Attacks are competitive enough to beat Cell.

Fire Off 2 Masenkos During The Special Kamehameha (Gohan)

More Info On How To Defeat Cell Here

You will fight Cell Jr., right before Perfect Cell. There will be 3 of them, and you will be accompanied by Vegeta and Trunks in Support.

Avoid The Center Of The Kamehamehas

It can be quite difficult to dodge Cell Jr.'s Kamehamehas, but you must do your best not to get hit by multiple beams at once! Avoid the center part where the beams overlap. Try moving laterally.

This fight can be rather overwhelming, even with the support of Trunks and Vegeta. As such, it's recommended to dispatch each Cell Jr. as fast as possible. Don't spend too much time flying around stalling for time.

Bring A Lot Of Vitadrink

This fight might be a bit challenging in terms of length and how difficult it is to dodge attacks. Make sure to bring a lot of health recovery items in preparation!

More Info On How To Defeat Cell Jr. Here