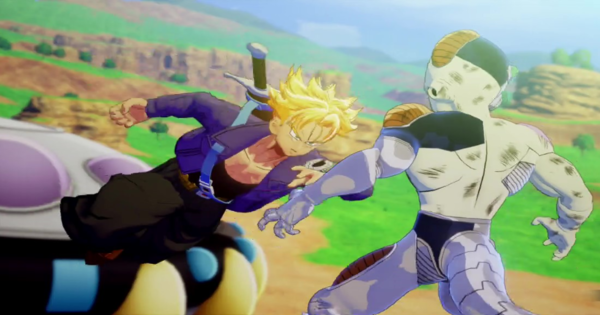 Start Of The Cell Saga

You will fight Mecha Friez as the first boss in the Cell Saga. He has the same moves & patterns as Frieza and serves as an introduction to Trunks's gameplay, so isn't too difficult to beat.

Mecha Frieza's attack follows the same pattern of hanging back -> initiating stunning melee attacks / Ranged barrage -> Combo, just like the normal Frieza. The only difference is he will use final form Special Attacks only.

Focus On Avoiding Damage And Chaining Your Combos

Just as with Frieza, focus on avoiding Mecha 's attacks as most of them combo into big damages. He has frequent openings so there's ton of opportunity to chain combos on him.

Follows Up Attacks With Death Pummel

Mecha Frieza will follow-up his attacks with a Death Pummel. Depending on the timing, you may be able to dodge away before the Death Pummel connect.

Dodge Or Interrupt As Frieza Is Powering Up (Red Ki)

Mecha will enter a melee offensive phase after he powers up (Red Ki), charging at you quickly for a stunning blow and combos. If you stop his first attack after charge, it is interrupted.

Mecha Frieza will engage you with a melee attack, then immediately get behind you for a knuckle smash. This is often accompanied by a Death Pummel. Dodge at least twice when he's meleeing.

Charges at you quickly in a line. Move out the red arrow indicating its attack direction.

Lunge forward and kicks in a wide 360 degrees arc. Dash backwards or up / down to evade. If evading isn't possible, defend. The other version kicks you while you're on the ground. You may be able to dodge it if your stun wears off before it connects.

Fires consecutive semi-tracing Ki balls, with a final big K Ball attack. Keep dashing to the sides to evade them all. Don't defend as it will likely break your defense.

Charge up for a wide-fanning beam attack. Evade the red lines to avoid.

Lunge forward and kicks in a wide 360 degrees arc. Dash backwards or up / down to evade. If evading isn't possible, defend.

Sends a couple of homing spinning slicer attack toward you. Dodge quickly at least twice to evade, or defend.

Charges a powerful Energy ball attack then throwing it. The ball can take up the whole screen so dash at least twice to evade. Can be interrupted if you incapacitate him before thrown.