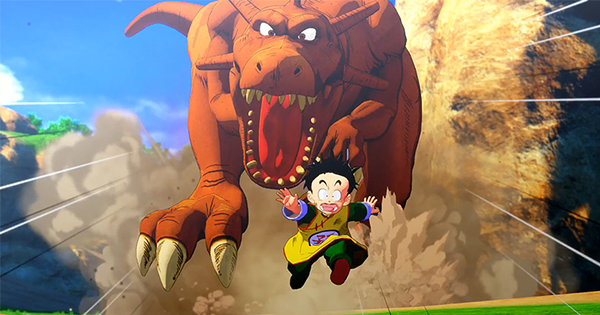 A Saiyan who spends his days training in the hopes of fighting strong opponents.

He will be added to your party from the Saiyan Saga.

Goku - How To Use & Special Attack

The son of Goku and Chi-Chi. He was named after Goku's adoptive grandfather. He is passionate about his studies and hopes to become a scholar someday. He will be added to your party from the Saiyan Saga.

Gohan - How To Use & Special Attack

The reincarnation of the fearsome Demon King Piccolo that once terrorized the world. In addition to his regenerative ability, he possesses a wide array of combat techniques. He will be added to your party from the Saiyan Saga.

Piccolo - How To Use & Special Attack

The prince of the Saiyans. As an elite warrior, he is the most distinguished of the few remaining of his kind.

He will be added to your party from the Frieza Saga.

Vegeta - How To Use & Special Attack

The son of Vegeta and Bulma. He uses a time machine to travel back in time with the hopes of saving the future.

He will be added to your party from the Androids Saga.

Trunks - How To Use & Special Attack

Part of boosting your stats, you can combine the playable characters and support characters to create party bonuses. This will raise your DEF and ATK to make your battles easier to finish.

Goku's second son. Unlike his mature older brother, he is mischievous and has achieved the Super Saiyan transformation at a very young age.

The son of Vegeta and Bulma. Trunks can transform into a Super Saiyan at such a young age, and is slightly stronger than his best friend Goten.

Goku's best friend and fellow Turtle School trainee. Unlike other Earthlings, he doesn't have a nose.

Practitioner of the Wolf Fang Fist technique. He was once a desert bandit with his friend Puar and was deathly shy around women, but he's overcome that fear.

A three-eyed man who trained under the Crane Hermit, the rival of Master Roshi. He has distanced himself from the Crane School and now walks his own path.

Tien's partner and fellow Crane School graduate. He possesses a variety of telekinetic skills, the most powerful of which is his paralysis technique.

An android of Dr. Gero's though originally a human. She is the twin sister of Android 17.

Playable Characters Are Can Be Used For Battle

Playable characters are the characters the players can take control of to do battles, roam the world, or gather resources. They are essential in progressing the story.

Support characters will support the playable characters mainly in combat. They come with different moves that are suitable for defense, offense, or debuffs.