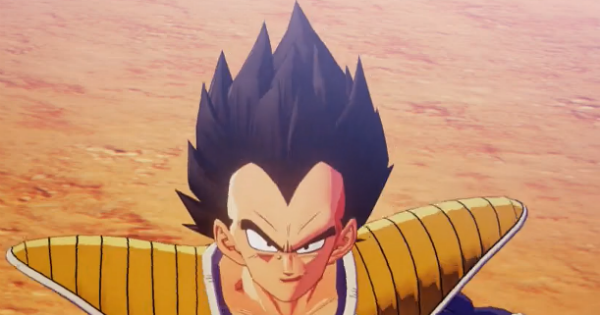 Find the ! Mark in the Dragon Radar at the top right of the screen and reach to the location, where you see red light from the ground to the sky.

This is the third battle Vs Nappa. You've already beaten him in the previous Episode so you know the drill.

>> Recheck On How To Beat Nappa Here

There are certain things you'd better to do when it comes to boss battle. Dodge & time your attacks in battle, level up before battles if you can't win etc.

When you see Nappa begins to use Giant Storm, immediately move out. There is a delay between the circle going down and the damage, so immediately dash to the side when you see it!

To the Battlegrounds - Walkthrough Chart

Find the ! Mark on the Dragon Radar at the top right of the screen and reach to the location, where you see red light from the ground to the sky.

Just before this battle, "Kaioken" (Transformation) is unlocked. Use the new skill (L2+ R2 + Symbol button) to Defeat Vegeta!

As Vegeta becomes giant, his actions become slower and he has downtime periods between attacks. Time your attack to deal massive damage.

There are certain things you should do when it comes to boss battles. Dodge & time your attacks in battle, level up before battles if you can't win etc.

Out Of Breath After Rage Phase Passes

After Vegeta's rage phase wears off, he will become exhausted and unable to move. Use this window of opportunity to deal massive damage with a special attack! So, Focus solely on evasion.

Vegeta has many melee special attacks that will combo chain resulting in massive damage, such as Dash Attack followed with a Meteor Hammer. Keep your distance and let him charge you first so you can evade and counter for greater damage.

Vegeta's Consecutive Energy Shot shoots many Energy Shots that can break your guard, leaving you defenseless against consecutive shots and the final Big Energy Shot which deals massive damage. Focus on evading instead.

More Information About How To Beat Vegeta Here

Get Close To Down It Fast

The fastest method of bringing down Great Ape Vegeta is get close and use melee attacks against it, especially its head.

There will be a phase where Great Ape Vegeta will slam the ground violently in quick succession, striking a wide area quickly. Avoid this and then get back into the fight.