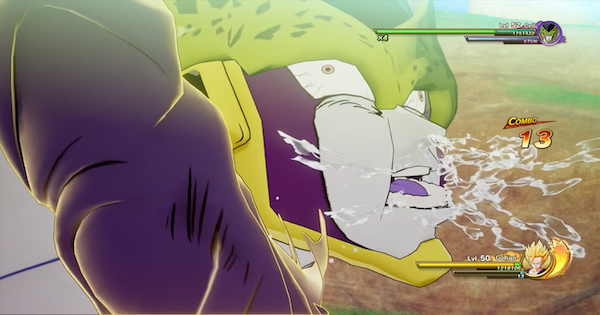 How To Beat Cell

You will take on Cell in three different forms a total of 8 times in the Android Saga. Once as Imperfect Cell, Twice as Semi-Perfect Cell, and Four Times as Perfect Cell.

Rapid Fire Ki Wave slows down time for its duration and deals a rather large amount of damage. You can expect to do about 30,000 damage each hit, and it's quite easy to land.

Counterattack After His Beam Attacks

As with other bosses, as soon as they fire off their special attacks, side step and respond with your own. In this case, Special Beam Cannon or Rapid Fire Ki Wave are good options.

You will take on Semi-Perfect Cell two times. Once as Goku and once as Vegeta.

Dodging this move will be key in ensuring you don't take an excessive amount of damage. Press your dodge button at the timing seen in the above picture.

After knocking you down with his Sonic Blow combo, Cell will often fire off a ranged special attack, such as Kamehameha. Even if you get hit with the Sonic Blow, spaming dodge to the side to avoid the connecting special attack! Respond with a ranged attack of your own after dodging successfully.

You will fight Perfect Cell 5 times. The final time will include several new abilities.

Fire Off 2 Masenkos During The Special Kamehameha

Cell is able to use Krillin's signature move, Solar Flare. He will glow extremely brightly and stun/disorient those near him. This will leave you vulnerable for follow-up attacks.

Goku's signature move! A beam of energy emitted outward along the red indicator. Dodge as usual.

A different version of the Kamehameha. Still does basically the same thing, but appears to turn slightly in your direction.

Piccolo's signature move. Fires out a burst of energy in a narrow line ahead of him.

Jumps behind you and absorbs your vitality, restoring about 50-60,000 HP. So far, we haven't been able to dodge this ability, but it might be possible. (If you were able to dodge it, please let us know how in the comments.)

Cell charges forward and kicks you 3 times. This is often followed up with a long range beam attack.

Cell creates a massive purple sphere around himself and knocks back opponents. He tends to do this when you get too close to him.

Similar to Android 17's ability. Pounds out a series of fiery kicks in your direction.

Cell Splits up into 3 clones. Change the target with the right control stick and defeat them as soon as possible.

While Clones are up, they will fire off projectiles frequently. These will obscure your vision and leave you with less room to maneuver.

While active, Cell's clones will copy some of his abilities. This will result in way more projectiles active on the field.

During the final battle with Perfect Cell, he will trigger a brief animation and begin to channel a Kamehameha. You will get a prompt on your screen to defeat him. Fire off attacks to bring down the health bar as fast as possible.

Only in the final battle. Summons a ring of fiery balls that explode in a row like dominoes.

Cell splits up into multiple copies and marks the area with red lasers. After a while, he fires beams at these locations.

I can doge it it’s pretty easy