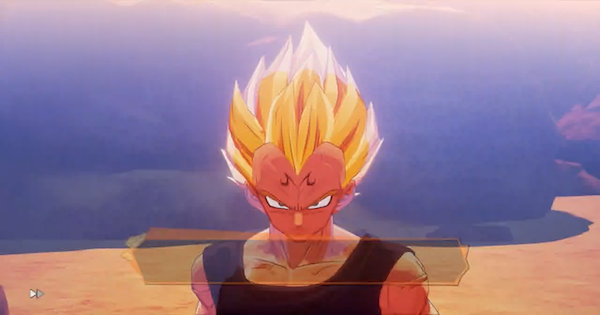 You will take on Majin Vegeta in the Majin Buu Saga while playing as Goku.

Vegeta has several powerful long range abilities which should be dodged every time to conserve HP. Final Flash, Galick Gun, and Energy Blast are all easily avoidable by moving away! Wait till they're fully over before you re-engage.

Watch Out For Big Bang

Vegeta's other abilities are rather easy to dodge, but Big Bang (especially when Surged, as he fires out 3 blasts) is an exception, as its explosion radius is rather large. If you don't feel confident in dodging it, guard during it instead!

Try to only use ranged moves if Vegeta is also in the middle of using one (which you've dodged). Staying in one place is a surefire way to take a massive Galick Gun to the face. Play slow and safe whenever possible. Stick to your usual combos and you should be okay.

This ability is like a wider Kamehameha. He will place a red marker in front of him indicating where it will land. Make sure you get the dodge timing right!

The same ability as regular Vegeta. Fires a massive beam of power in front of you. Always dodge this one.

A physical combo, he charges forward and jumps up to slam you down.

Vegeta charges forward, teleports behind you and slams you downward forcefully. The final hit is what you want to dodge, don't be fooled by the first charge.

Vegeta releases a massive volley of energy balls in your area. Keep flying to get away from them.

Vegeta fires out 3 beams which explode into massive balls of fire. Keep moving to dodge these. (Big Bang Attack only launches one).