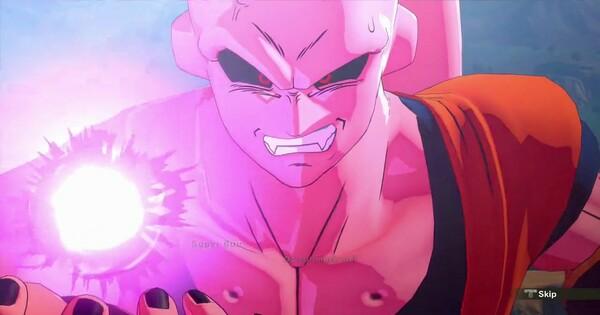 Read this Dragon Ball Z Kakarot guide to find out how to beat Super Buu. Get tips on best methods to win, how to counter its special attacks and beat Super Boo fast in DBZ Kakarot!

The Fight Of Fusions

1 + 1 > 2?! In order to beat the new threat, our brave Z warriors must merge together as one to increase their power to newer heights, but will this be enough?

Galactic Donuts will root Super Buu in place while Super Ghost Kamikaze Attack will deal heavy damage against him. Spam this combo to beat Super Buu with Gotenks fast!

As with Majin Buu Super Buu is also susceptible to the Crushing Strike melee lock-down combo that will stagger lock Super Buu, allowing you to out-DPS his crazy damage.

While being up close and personal is the way to go, there's plenty of opportunity to chip away Super Buu's HP using Masenko, like when you've dodged his Evil Buster. Don't let the opportunity pass by!

Spam All 4 Super Attacks For Vegito

Its a race to outdamage each other when you fight Super Buu as he now has new moves to use against you. Instead of traditional fighting tactics, this battle will go faster if you spam All 4 Super Attacks. Use Spirit Sword when you get close as it deals great damage, and everything else at range.

Charging beam attack. Dodge to the sides as with any ray attack. Used as a follow up to incapacitating attack.

Energy explosion originating from Super Buu causing damage and knock-back. Defend as this move is difficult to dodge.

Super Buu only uses this when you're playing as Vegito

Fires 5 ghosts at you which will explode. Hard to dodge if you're far away. Get as close as possible to Super Buu before he fires, then dodge.

Super Buu only uses this when you're playing as Vegito

Roots you in place, rendering you helpless if hit. No way to get out of this until its timer is up.