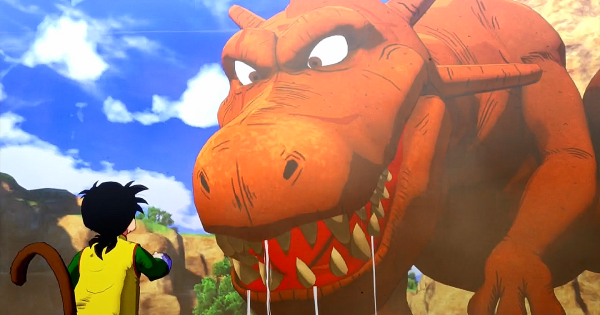 Help Gohan Find Something To Eat

No Combat In This Mission

In this part of the game, you'll take control of Gohan, who will be stuck fending for himself. There is no combat and it only requires you to move the character forward to progress the story.

Check How Gohan Is Doing

Usually the red light beam in your immediate vicinity is your target area. When you feel lost, take a look around and check for any light beams to help guide your way.

You'll have to fight 3 sets of 3 Skull Robos. Check your mini map to know the locations of the battles to complete them fast.

Skull Robos will send out lines of red lasers to reveal their missiles' trajectory. Keep moving to avoid getting hit by them.

During these fights, it's best to focus fire on a single Skull Robo. Lock onto the target and beat them down until you take all Skull Robos out one by one.

Check Nearby Trees For Unripe Apples

To find unripe apples, check your mini map to show your where there's an apple grove. Pass by any trees that are glowing yellow, you'll need to collect a lot to get 2 unripe apples.

Due to Gohan's exposure to the full moon and his Saiyan blood, he transforms into a giant ape that you have to defeat as Piccolo!
▼Check Out How To Beat Gohan (Ape Form)!

When Gohan jumps high up, check the floor below to see the diameter of his area-of-effect attack. Move back and keep away from this area to keep Piccolo safe.

Has Large Wind Up Before Mouth Cannon

When Gohan raises both his arms, he's getting ready for his Mouth Cannon move. This is a straight beam so move to the left or right to dodge.

Gohan's monkey form will also do powerful ground pound attacks with his arms. Keep away from his front when he does this to avoid taking too much damage.

Jumps Forward To Do Damage

Gohan's monkey form is a big target but can do very heavy damage, especially when jumping forward. Keep your distance and use ranged attacks to bring down his HP.

Surviving In The Wild

When hunting deer, look for a group of fruit-bearing trees near the mountain wall. Chasing the deer into the wall will block their escape and you can rush towards them to catch them.

There are several light beams in the area you can check out if they're the source of power Piccolo sensed. You'll meet several people you need to fight. These fights can be done in any order.

One mission marker will lead you to Yamcha, who's been training under Kami now. He'll challenge you to a fight so come prepared before talking to him.
▼Check Out How To Beat Yamcha!

Another marker will lead you to Tien, who has also been training under Kami. He will also challenge you to a fight so prep before speaking with him.
▼Check Out How To Beat Tien!

A third mission marker will lead you to Krillin, another current pupil of Kami. Speak to Krillin to challenge him to a fight.
▼Check Out How To Beat Krillin!

Yamcha Is At Level 4

When you face Yamcha, he's at level 4. He's not a very tough opponent but can dish out pain if you don't dodge or guard against his attacks.

When Yamcha does his Spirit Ball move, he'll send a strong energy ball your way. If you get hit, it'll do several hits simultaneously and can eat up your HP so sidestep to dodge.

When Yamcha glows red, he's powering up for a dangerous attack. Getting hit can stagger you, however, if you guard you can counterattack and stop him from continuing this move.

Tien Will Be At Level 5

When Tien challenges Piccolo, he'll be at level 5. As long as you're leveled up properly, Tien will not be an incredibly hard opponent.

Tien has an attack that sends a volley of homing energy balls towards you. You can guard or dodge this move in any way you see fit.

When Tien does his Dodon Ray move, he'll fire a thin laser beam straight towards you. Simply move to the side and move closer to him, he's vulnerable to attack at this time.

Krillin Is Now At Level 5

Krillin will now be at level 5, compared to when you first fought him as Goku. He'll also have more powerful moves from the previous fight.

Same as the previous fight, Krillin will also do a straightforward Kamehameha. Dodge to the side then close in on him to land a couple of free hits.

Avoid Getting Hit When Krillin Is Glowing

When Krillin is glowing red, this means he's powering up. Make sure to avoid getting hit by his combo or you'll get stunned for a few seconds.