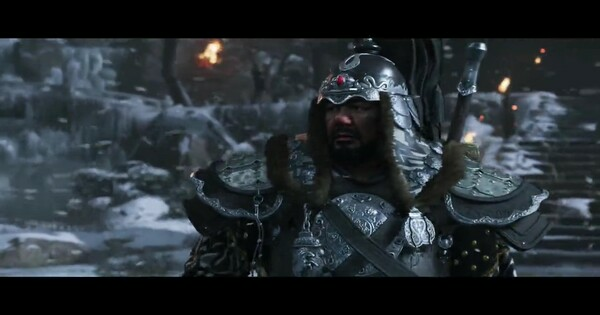 Ghost Of Tsushima
Khan Boss Fight Guide - How To Beat

Read this guide to how to beat Khotun Khan in a boss fight guide during 'Eternal Blue Sky' Quest in Ghost of Tsushima! Find out the enemy's weakness, strategy, and more!

When Do You Fight Khotun Khan?

Boss fight against Khotun Khan is an unmissable boss fight in the 'Eternal Blue Sky' main quest. Defeating him will end Act 2 and start Act 3 of the story.

This battle is long, and you'll be both fighting 1 on 1 against a tough opponent, and against enemy swarms. You will need every trick up your sleeve to push through this final act of Act 2.

Khotun Khan - How To Beat Tips

Khotun Khan's normal & blue-icon attacks are quite easy to parry, letting you parry his attacks to get Resolve gauge and make an counterattack. Be patient and let Khotun Khan make the opening for you.

Check out How To Parry here!

Khotun Khan will use 2 types unblockable attacks for both close and long distance. These attacks will be indicated by a red cross mark, which you may find him bashing you or trying to stab you with his spear. His attack cue comes quite early giving you plenty to dash back to avoid his attacks. His spear attacks comes in chains of 3 strikes.

Change Stances Often Based on Enemies You're Fighting

You will need to clear out swarms of enemies fast or you'll be overruned. The most efficient ways to do so is to switch to different stance based on enemies you're fighting, like switching to Moon Stance to deal with tough brutes quickly. This Can be done quickly by pressing R2 + Triangle.

Stances - How To Learn & Types

Archers will cause havoc if not dealt with quickly, but don't charge into swarms of enemies to get to them - instead, use items like Smoke Bombs, Kunai & other items to stagger swarms so you can rush to the back and kill the archers first, then deal with the slower fighters.

Shoot At Barrels If They're Around

Barrels can be a quick way to deal with archers on balconies. Shoot the barrels to get rid of archers at the high ground quickly.