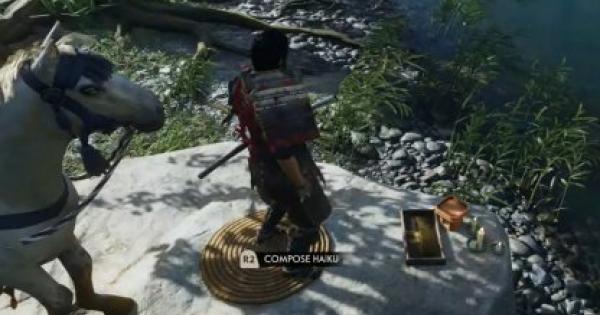 Directly south-east of Kuta Grasslands, east of the Sibling Rocks.

On top of the Black Sands Inlet, north of Takuzudama Cemetery and west of Brown River Gorge.

Right on top of the Field Of The Equinox Flower, north-west of Ijima Swamp.

Directly on the Musashi Coast marker, way west of the Kushi Grasslands, and south of Lucky Genzo's Inn.

On top of Benkei's Falls and south of Little Monk's Pond.

South-west of the Trapper's House, west of Iwai Village.

Right on top of the Whaler's Coast marker, north of Mount Jogaku.

Read A Haiku Poem To Reflect Your Life

There are certain spots in the land of Tsushima where Jin could reflect on his life and actions to read a Haiku poem.

Reading a Haiku will grant you a new Headband Vanity Gear, based on the poem which you have just read!