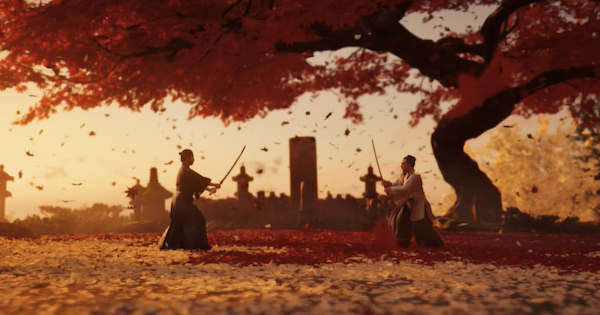 Read this guide to how to beat Lord Shimura in the ending boss fight battle Ghost of Tsushima! Find out the enemy's weakness, gameplay tips, strategy, and more!

When Do You Fight Lord Shimura?

Duel In "The Tale of Lord Shimura"

The boss fight against Lord Shimura happens at the end of the last story chapter "The Tale of Lord Shimura". Due to their differences, Jin and Shimura face-off knowing that only one person can leave.

Check Out The Main Story Here!

Choices After The Fight

After defeating Lord Shimura, you will be given the two choices: to let him live or kill him. While the main story ends relatively the same regardless of the choice, both have some impact on the rest of your playthrough.

Lord Shimura - How To Beat Tips

Lord Shimura will attack you head-on. Be wary of his normal attacks and block to parry. Follow your parry with a △ mixed with □ to damage him heavily. It is highly recommended to parry him as this is the only way to gain Resolve and heal during this fight!

Check Out How To Parry Here!

Use Parry To Gain Resolve & Heal

As this fight is only between you and Lord Shimura, gaining Renown for healing yourself can only be done by countering and parrying him. Be vigilant and watch when he preps for an attack. Learn from his moves and timings even after getting hit!

Check Out The Resolve Guide Here!

Whittling his health to a certain point forces the two of you to cross swords. Take this as a sign that he's going to use more devastating moves.  You cross blades twice during the course of this duel, once when he's at 25% health and the last at 50% health.

Watch Out When He Sheathes His Katana

When Lord Shimura sheathes his katana, prepare to dodge as he will perform a string of 3 unblockable attacks. Dodge at the right time as getting caught with just one will leave you vulnerable to the following strikes.

Dodge The Overhead & Side Slash

Lord Shimura will sometimes attack you with an unblockable overhead strike combo. Dodge to the sides 3 times to evade this. He also uses a side slash that starts with an unblockable slash, followed by two other attacks. Note that you can parry the third move of this combo.

Use Heavenly Strikes if you find it difficult to dodge Lord Shimura's red attacks. However, it is recommended that you wait for him to attack and parry him instead as you may need the Resolve to heal.