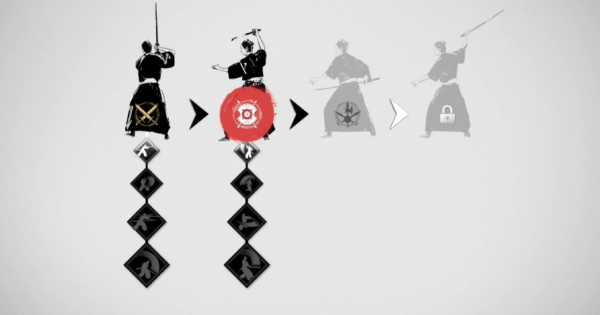 Ghost Of Tsushima
All Stances List - How To Swap & Explained

Read this guide / tips on how to get new stances in Ghost of Tsushima. Find out how to get points, how to swap / change, skill tree (Stone, Water, Wind & Moon, Ghost), explained!

Being Jin's default stance that he uses from the beginning of the game, this stance is very effective against Swordsmen. It is highly recommended to use it during duels as well.

Wind Stance is the second stance that Jin can learn by collecting 8 stance slots. This stance focuses on its reach and forward momentum, and are made to counter spear wielders. Also uses a series of kicks to knockback enemies and lead them falling from cliffs or into open flames.

The third stance that Jin learns after collecting 12 stance slots, the Moon Stance is a powerful staggering stance, meant to take down the toughest of brutes the Mongolian invaders can throw at you.

A temporary powerful stance of vengeance that will dispatch any enemies in sight. This stance will be deadly against all enemy types, but will require a charge of your Ghost Meter to use temporarily. The Ghost Meter can be charged by Slaughtering (assassinating) Mongol Leaders or killing enough enemies without taking any damage. This stance will automatically be available upon progressing your story.

How Do You Learn Stances?

Jin will be able to learn new Stances by killing or observing Mongol Leaders, often found in base or in war parties around Tsushima. Once learning a new Stance, a new Stance skill tree will be unlocked to invest your Technique Points to learn new moves.

You may earn up to 2 Stance Slots per Captain by first observing the target while hidden, then proceeding to kill them to make the best of your kills and unlock your stances faster.

In order to learn a new stance, you will need to fill up the required slots by killing or observing Mongol Leaders. These required slots differentiates with each stance.

Technique Made To Counter Specific Enemies

Stances are different attack patterns that Jin can learn throughout his journey, and can be swapped on the fly during battle. Each Stance has its own strength against specific enemy archetypes, and learning which technique to use can vastly change the odds to your favor.

Throughout your journey, you will be able to learn 4 different types of stance; Stone, Water, Wind & Moon. These stances each have a unique attack combo and strength against certain enemies.

You can change stances on the fly even during the heat of the battle. Time stops momentarily once your press R2, allowing you to select the stance that you want. Remember that you need to swap to the proper stances frequently in order to survive the encounters in Ghost of Tsushima.