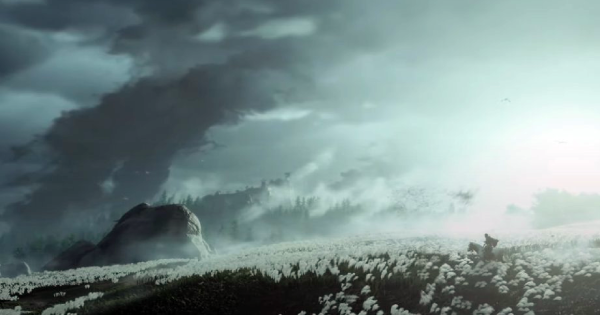 Read this for all information announced in State of Play trailer for Ghost Of Tsushima. Includes summary for gameplay details, combat, customization, Japanese VO, filters & more!

Ghost of Tsushima's latest detail have been released on the lates State Of Play video on May 14th 2020. The following will be a summary & breakdown of the said feature video. If you want to see the gameplay in action, click the player above to watch the video!

Explore The Land Of Tsushima

You play as Jin, a disgraced Samurai to journey the land of feudal Japan, amidst the Mongolian invasion. You may travel the vast open world environment on foot or horseback, above hills and forests that depict the beauty of the ancient land.

Use The Guiding Wind To Find Your Path

As you travel the land, you can mark a waypoint on your map and literally allow the wind to guide you to that location. Using the Guiding Wind feature, you will be able to see a streak of wind pointing you to your destination.

There are many locations and shrines hidden within the land of Tsushima. Shrines, side quests, and precious materials can be found all over the location. Keep your eyes open for any loots.

Check Out The Shrines Guide Here!

Stand Off To Duel Enemies

As a honorable Samurai, you may call your enemies forth and duel them head to head with the Stand Off mode. Make split second decisions to find their opening and cut down the enemies that stands before you.

Jin can also be a skilled marksman, able to pick off enemies from afar with the use of his bows. Carefully placed shot can be just as deadly as a blade across the neck.

Jin have mastered multiple stances and forms to use in battle. Each stance has a strength & weakness for each type of enemies. Judge your situation methodically and deliver a precise counter attack.

Use Enemy's Fear As Your Advantage

Shrouded as the infamous "Ghost", Jin will be able to utilize the very fear that haunts your enemies to take them down. Distract, execute, and break the morale of your enemies that fears the Ghost.

Use Shinobi Gadgets To Manipulate Enemies

As the Ghost, you will have multiple ninja gears that helps you even the odds against hordes of enemies. Use grappling hook to relocate, kunais to quickly dispatch enemies from range, and smoke bombs to slip back into the shadows.

You will be able to customize Jin to your liking with any armor & equipments that you find. These armors each have distinct features, complimenting different styles of game play. Find the gear loadouts that fits you the most.

Omamori Charms are accessories that can be used to further enhance Jin's ability & stats. These come in various uses, from augmenting your gear, amping your stats and granting new abilities.

You can also change your armor color scheme with the use of dyes. Look for colorful flowers around the land to make dyes for your cosmetic changes.

Ghost of Tsushima will feature in-depth photo mode, including features like Color grading, Depth of Field, Facial emotion, and more. You may also tweak the soundtrack and wind direction, making this feature great for personal video takes as well.

Japanese Voice Over With Subtitle

You will also have an option to play the Ghost of Tsushima will a Japanese voice over with English subtitles. Voiced by talented voice actors such as Kazuya Nakai, this feature will give players further immersion into the world of Tsushima.

A special Samurai Cinema video filter will also be available as a feature. This will turn your Ghost of Tsushima game reminiscent of the classic noire samurai movies with the intense black & white cuts.