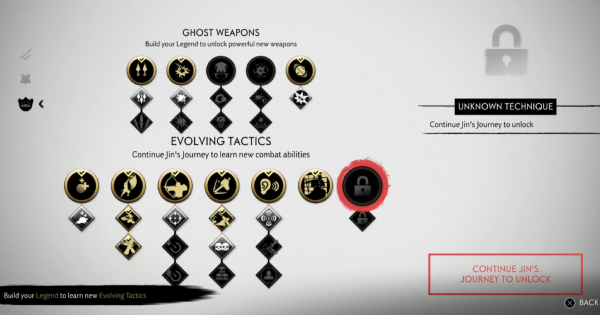 Check Out How To Get Technique Points Here

After the Kunai, your first Ghost Weapon, the remaining 4 Ghost Weapons can be unlocked in any order you wish. Try choosing one that suits your main playstyle.

Check Out The Legend Ranks Guide!

Sticky Bombs deal a moderate damage and stagger damage in area of effect, and work similarly to Black Powder Bomb. However, the Sticky Bomb does not require manual aiming being a Quick Throw Weapon and will stick to targets, removing the risk of missing.

Wind Chime Should Be Last Choice

Wind Chimes are purely made for stealth play and diversion. It will not deal any kind of damage, and will not be useful after entering combat. Compared to other weapons in terms of versatility, we recommend the Wind Chime to be the last item to be unlocked.

*Level up Legend of Ghost to unlock new weapons.

Kunai can be deployed quickly, having additional projectile and damage increase can be very useful. If you do not have any particular Ghost Weapon you wish to upgrade, consider investing in this weapon first.

"Concussive Blast" can knock down the enemy, opening a group of enemies up for free hits. This may come in handy when facing hordes of enemies at once.

If used solely for escape, non-upgraded Smoke Bomb will be viable to do the trick. Consider upgrading them when you are playing on higher difficulty or are stuck in the latter part of the game.

"Explosive Powder" will increase the area of effect and damage dealt. This will also assure a one-hit kill to one of the enemy stuck with the bomb, and can be great way to remove tough enemies from the fight.

Upgrading to the Firecracker can lure multiple enemies at the same time, but its use are limited. You may, however, combo this weapon with Sticky Bomb or Explosive Arrow to clear groups of enemies with devestating effect.

Not very useful as it seems, as your HP will still be a hit away from death even after getting back up. This game does not penalize the player for dying, so you may wish to restart the battle after respawn should you fall rather than clinging on to your current play.

Standoff is a great way of starting off a fight with Resolve, being able to kill extra enemy while getting additional Resolve is also a great investment. If you have few spare Technique Points, consider maxing this skill.

Concentration makes the bow very versatile in almost any situation. Although it has a cool down time, you may wish to invest in this skill if you're an avid sniper. This skill also works hand in hand when used with Tadayori's Armor.

> Check Out The Best Build Guide!

"Safe Landing" is a great skill to have early on in the game, and will be useful even for exploring. Chain Assassination is also a good skill to invest, but Improved Chain Assassination may be left for later occasion, as it is quite rare to see 3 enemies huddled up in a single spot.

"Far Hearing" is great skill to have when tacking higher difficulty or later game where large groups of enemies reside in a position. Other skills should be left for later, when you have extra Technique Points.

Shoji Assassination is a passive skill that cannot be upgraded.

Ghost Stance will be unlocked automatically during the Act 2.The Ghost Of Yarikawa story quest, and cannot be upgraded further.