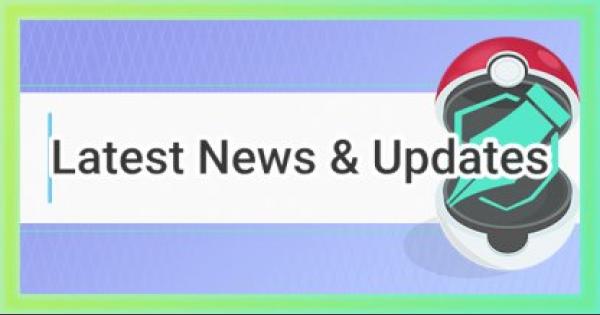 The Latest In Pokemon GO!

The 2020 Pokemon Day festivities have begun! Multiple events are being held, one of which features clone versions of starter Pokemon appearing in raids everywhere. This is a limited time opportunity, so don't miss out!

Get Fossil Pokemon From 7km Eggs

During this event, all Pokemon that hatch from 7km eggs will be Fossil Pokemon! The duration of this event hasn't been announced yet, so make sure to hatch a ton of 7km eggs!

For 4 days in February 2020, trainers can catch new pink Pokemon - Audino & Alomomola! These Pokemon have arrived in the game, specifically for this event!

During the event, trainers can spin PokeStops to get new Valentine's Day tasks. When completed, they will reward trainers with pink Pokemon encounters.

Bagon Will Spawn More Often In The Field

Though not officially announced, it may be possible for Shiny Bagon to appear in Pokemon GO during the event.

Lure Modules Will Last For 3 Hours

During Community Day, lure modules will be active for 3 hours - lasting throughout the entire event. Find a strategic location in between several Poke Stops to encounter as many Bagon as you can!

Trainers will earn up to 3 times experience when they catch Pokemon during the April 2019 Community Day. If you use a Lucky Egg, you can earn up to x6 catch experience!

The Pokemon GO Bug Out event will feature more Bug Type Pokemon appearing in the wild! Limited-Time Bug Type Field Research tasks will also be available and Incenses will last longer when activated!

Check Out Bug Out Event Details!

The Renegade Pokemon Giratina is back from the Distortion World and its bringing its Origin Forme. For April 2019, Trainers can challenge and capture the legendary Pokemon in 5-Star raid battles!

Legendary Lunch Hour Is Being Tested

Increased Number Of Raids During Lunch

Players of Pokemon Go will be able to participate in the first Legendary Lunch Hour on March 13, 2019! From 12nn to 1pm in your local time zone, there will be an increase in the number of Raids!

See More Treecko In The Wild!

The Grass-Type Pokemon Treecko will spawn more often and can be encountered more in the wild during March 2019 Community Day.

Though not officially announced, it may be possible for Shiny Treecko to appear in Pokemon GO during the event.

Lure Modules Will Last For 3 Hours

During Community Day, lure modules will be active for 3 hours - lasting throughout the entire event. Look for a spot in between many active lures to catch as many Treecko during the event.

Hatching Eggs will take less distance during the Community Day as Incubators will be 4x more effective! This is the perfect time to hatch long distance eggs such as 10 km or 7 km ones.

Rayquaza is back and with a vengeance! Trainers can encounter and catch this legendary Pokemon in a Special Raid Weekend in 5-Star raid battles!

A week long event that focuses on Trainer, Gym, Raid Battles and Fighting Pokemon, the Battle Showdown event will add a new Fighting move, Power-Up Punch to the game, along with battle-centric bonuses and rewards!

During the event, 4 Fighting Pokemon such as Machop, Mankey, Meditite, and Makuhita will spawn more in the map. Catch them to earn more Pokemon candy or get higher IV versions of them!

The event will also introduce Shiny Mankey and Shiny Machop into the game. Their bodies will have an overall green color compared to their typical color scheme.

Players who participate in the Battle Showdown event will earn 2x Catch, Battle, and Raid Stardust. Gym Badge XP will also be double during the event while Trainer Battles & Team Leader Battles will give more rewards.

The new Fighting Move, Power-Up Punch, has been added to the game during the event. There are only certain Fighting Pokemon that can learn or come with this technique.

Pokemon That Can Learn Power-Up Punch

Smeargle, the last Johto Pokemon implemented in Pokemon GO, can be encountered now via the GO Snapshot feature! Take snapshots of your favorite Pokemon for a chance to catch Smeargle!

Check Out How To Catch Smeargle Here!

Trainers will now be able to change their teams in Pokemon Go with the addition of the new Team Medallion item! This will work for all players, regardless of the reason behind the team change.

Check Out How To Change Teams Here!

Announced on February 11, 2019, Pokemon GO is bringing a new feature into the app - GO Snapshot! Trainers will be able to take photos of their favorite Pokemon in the Pokemon Storage using the AR+ feature.

Shiny Meltan is in Pokemon Go!

The shiny form of the mystical Pokemon, Meltan, has been added to the game. Open up a mystery box and get a chance to meet and catch a Shiny Meltan in the event.

Shorter Countdown Between Mystery Box Use

For the event, the duration between the Mystery Box has been reduced! From 7 days, it will only be 3 days in between each use.

This Pokemon Day 2019, Trainers will encounter more Kanto region Pokemon, fight them as raid bosses, spot a Shiny Pidgey or Rattata, and even a flower-crowned Pikachu or Eevee!

During Pokemon Day 2019, Trainers may encounter a shiny Pidgey or Rattata in the wild. These are new Shiny Pokemon that are only being implemented during this event.

In this special event, Pikachu and Eevee who are wearing flower crowns will make an appearance in the wild as well as encounters when completing Field Research tasks.

Now's the time to fill up your Pokedex with Kanto region Pokemon as they'll be popping up more in the wild than ever before! These include the famous starter Pokemon such as Charmander, Bulbasaur, and Squirtle.

Kanto region Pokemon will also show up more often as raid bosses for the Pokemon Day 2019 event. There is no news whether they'll be added to the current roster or will replace the current raid bosses in the field.

The chart below showcases the pink Pokemon that will be featured in the Valentine's event! These are the types you'll encounter in the wild.

*You may encounter the Shiny versions of these Pokemon in the wild!

During the Valentine's event, you'll encounter Chansey & Porygon in raid battles across all gyms. This is the perfect time to get good IV Chansey or Porygon Pokemon!

You may be able to hatch the baby Pokemon Happiny from 7 km eggs! 7 km eggs can be received from gifts from friends!

During the Valentine's event, you'll be able to receive more candy every time you catch a Pokemon. If you use a Pinap Berry, you can earn up to 12 Pokemon candy in a single catch!

For the duration of the event, lure modules will last for up to 6 hours when placed on a Poke Stop. Be sure to take advantage of any active lures near you!

Get a Chance to Capture a New Legendary Pokemon

For the whole of February, get a chance to capture the Legendary Spatial Pokemon from Gen 4, Palkia! It'll hatch from all Tier 5 raid eggs across gyms.

Celebrate the Year of the Pig in Pokemon Go

Celebrate Lunar New Year in Pokemon Go with higher spawn rates for selected Pokemon, 2x catch and evolve XP, and a higher chance at getting Lucky Pokemons through trades! A shiny form for Spoink has also been added.

As part of the Lunar New Year celebration, Pokemon representing the 12 Chinese Zodiac Animals will appear more often in the game. Spoink, as the representation of the Year of the Pig, will appear more than the others.

It's a good time to level up because during the event, XP gained from catching and evolving Pokemon will be doubled!

Check Out How to Level Up Fast Here

Higher Chance to Get a Lucky Pokemon

Trade during the event and you might just get a Lucky Pokemon! For the whole event period, the chances to get Lucky Pokemon through trades have been increased.

Check Out How to Get Lucky Pokemon Here

During the February Community Day, Swinub will appear more often in the wild. This is the best chance to get high CP & high IV Swinub in your Pokemon inventory.

It's possible that shiny Swinub may appear during the Feb Community Day. Though Pokemon GO hasn't announced it yet, there is a high probability for this to happen.

Evolve Piloswine Via Sinnoh Stone To Get Mamoswine

Pokemon GO is implementing Piloswine's final 4th gen evolution into the game! If you use a Sinnoh Stone, you can evolve your Piloswine into a Mamoswine.

Check Out How To Get & Use Sinnoh Stones!

Evolve During Community Day To Get Special Move

If you evolve your Piloswine into Mamoswine during Community Day, they will learn the featured special move. No announcement on what the move has been made yet.

During Community Day, players will receive 3x more Stardust when catching Pokemon. Use a Star Piece to earn up to 4.5x more Stardust for powering & evolving your Pokemon.

Check Out How To Do PVP Trainer Battles!

During Community Day, when you activate a lure module into a Poke Stop, it will last for 3 hours. Stand between several Poke Stops to receive their effects in full.

Check Out How To Use Lure Modules Here!

Hoenn legendary Pokemon Groudon and Kyogre will make a return in raids as powerful bosses! Bring strong Grass Types to combat and exploit their weaknesses!

Capture a high IV & CP Shroomish and evolve it to a Breloom during the event's duration to learn the powerful move - Grass Knot!

More Pokemon from the Hoenn region will make an appearance in the map during this event! This is the perfect time to capture your favorites from Hoenn.

7KM eggs received from friends are more likely to hatch Hoenn Pokemon than others! Make sure to keep trading gifts with friends to receive 7KM eggs!

The Shiny Pokemon versions of Taillow and Zigzagoon may appear more frequently in the wild during the Hoenn celebration! Don't disregard them when you see them in your map, they just might be Shiny!

For a short time, Feebas can be encountered by getting & completed Limited Research tasks that you get from spinning Poke Stops!

A Shiny Feebas may appear when you complete a task and encounter the Pokemon! Keep your eyes peeled for a Feebas with a purple body color!

Don't forget to turn on your Adventure Sync so that your steps will be counted towards hatching your eggs even when Pokemon GO is closed or idle!

Players will also receive 2 times more Candy & Stardust when they hatch their Pokemon eggs, allowing you to power them up more.