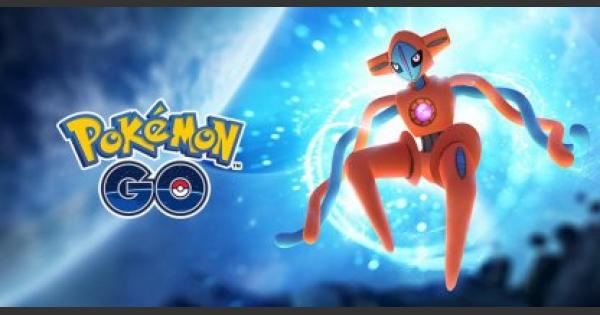 The Deoxys EX Raid has switched from its normal form, into its attack form, and can be challenged now! However, unlike normal Raids, you need to be invited to participate in this type of Raid!

Best Pokemon To Use Against Deoxys (Attack Form)

* Ranking is based on the DPS, ease of use, and durability of Pokemon that are types which are very effective against Deoxys (Attack Form).

(※) Legacy Move - cannot be learned at the moment

Deoxys is a Psychic type Pokemon, meaning that it is weak to bug and ghost type Pokemon and moves. Keep this in mind when choosing which Pokemon to use when battling Deoxys!

Even if Deoxys has turned into its attack form, the type is still the same. This means that even if the base stats are now different, you will still be able to use and exploit the same weaknesses that the normal form had.

When the weather is windy, it will boost the Attack Form Deoxys's CP to 1842.

You can also check Deoxys (Attack Form) Individual Value (IV) beyond it being 100% value. You just need to check its CP once it appears after defeating it in the raid.

Only One Person Needed

Since the Attack Form of Deoxys has low health, a properly leveled player can beat it one-on-one. However, it is recommended that you be at least level 30 before going up against Deoxys.

If you are not able to win against it alone yet, it is recommended to have at around 3-5 people to fight against it!