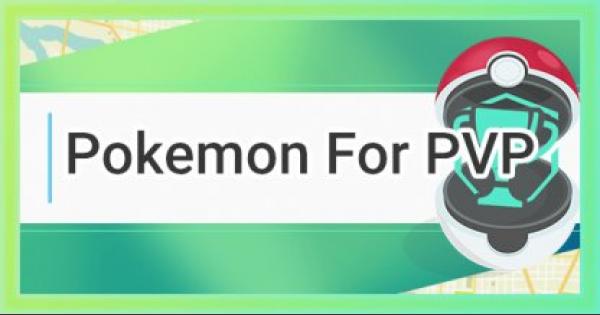 Want to go against another Trainer? Read this Pokemon GO guide on the recommended Pokemon for PVP Trainer Battles - plus battle tips & more!

Check Out How To PVP Battle Here!

There Is A CP Limit Per League

PVP Trainer battles in Pokemon GO are separated into 3 leagues - Great, Ultra, and Master. The Great & Ultra Leagues limit the CP of Pokemon you can bring into battle while the Master League has no CP limit.

The CP limit of Pokemon you can bring into battle for Great League is 1500. Legendary Pokemon such as Mewtwo exceed this limit & can't be used. Other Pokemon not normally used in gym & raid battles can be used due to the low CP limit.

Vine Whip is very powerful & can charge gauges fast. With this combination, Frenzy Plant can be used many times in one battle, though it's an exclusive Community Day move. Venusaur has good defense, making it a strong & durable Pokemon in battle.

Hydro Cannon is a limited Community Day move but its gauge charges fast so you can use it many times. Blastoise's Ice Beam can be used as a 2nd Charge Move, allowing you to fight another Type weak against Ice easily.

Arcanine is a strong Fire Type with high HP base stat, among all Pokemon that can fight in the Great League. Arcanine's Fast Move can charge his gauges pretty fast & is very strong. Learning Wild Charge will help him beat Water & Flying Types.

Kangaskhan is a Normal Type and is weak to a few other Types in Pokemon GO. It does have high base stats in defense, making it a tanky option. It can also learn a variety of Charge Moves, making it effective against other Types.

Zapdos is only weak to a couple of other Types and some moves are ineffective towards it. It has high Electric attack power but players who use Zapdos should be cautious of any Ground Types they face.

Azumarill has high HP stats and is only weak to a few Types. It can learn many Charge Moves, making it flexible & easy to create powerful combinations with. It is frequently used due to lack of Electric Types in the league.

Being a Steel Type, Skarmory is very durable & has high defense. He has strong Fast & Charge Moves that 2nd Charge Moves sometimes aren't needed. Flying Type attacks also match with Skarmory's Type, allowing him to use these moves as well.

Kingdra is a Dragon Type and able to use the very powerful Dragon Breath as its Fast Move. Due to it being a Dual Type, it doesn't have very many weak points. Kingdra is also very powerful with Water Type moves.

A must-have Pokemon in the Great League, Whiscash can attack quickly with Mud Shot. This move can fill up its Charge Move gauges quickly, allowing it to deal fast & big damage to its opponents.

The Community Day move Meteor Mash is a very powerful move to have for Metagross. Being a Steel Type, it has very good defense base stats. Learn Earthquake to combat against Fire Types that Metagross is weak to.

The Altaria is a Dragon Type Pokemon that has good defense, making it durable in battle. Dragon's Breath is a strong Fast Move and Sky Attack can deal good damage to a lot of Pokemon Type. Be cautious of fighting against Fairy Type Pokemon.

Alolan Muk has overall good base stats & is only weak against Psychic Types. Muk is a good counter to Azumarill (which is weak to Poison Types) that many people use in the Great League. Make sure to trade Alolan Muk in order to raise its Individual Value..

Cresselia's has good defense and its Psycho Cut move can charge its gauges fast. It is also an effective Pokemon against Dragon Types. It's recommended to raise its IV level first by trading before using Cresselia in battle.

Unless hit by moves that it is weak to, Umbreon's high defense stats make it hard for opponents to knock it out of battle. It has strong Dark Type moves that can take advantage of Pokemon weak to this type of attacks.

Being a Steel Type Pokemon, Melmetal is impervious to a lot of damage from other Types. It also has good defense stats. If equipped with Rock & Electric Type moves, Melmetal can easily defeat Azumarill & Altaria - both Pokemon often used in the Great League.

In Ultra League, almost all Pokemon can be used since the CP limit is 2500. A lot of powerful Pokemon show up in this league, including strong legendary Pokemon.

Latias's Dragon Breath is a useful Fast Move that can charge up its gauges quickly, allowing you to use your Charge Move frequently. It has defense & can withstand attacks. Teaching it Thunder will allow it to attack other Types of Pokemon as well.

Zapdos's Charge Beam is an excellent move to use in PVP battles. Zapdos has few weaknesses and has high attack stats but players should swap it out when it becomes ineffective in attacking other Types.

Groudon is an all-out Ground Type Pokemon with high base stats. Use its Mud Shot to charge up your gauges quickly, allowing you to use Earthquake frequently. It can also learn Solar Beam, a great counter attack to Water Pokemon.

Cresselia is high defense Psychic Type that only has a few weaknesses. Save its 2nd Charge Move for moves that can counteract other Pokemon Types that may appear in the Ultra League.

The Community Day move Meteor Mash is a very powerful move to have for Metagross. Being a Steel Type, it has very good defense base stats. Learn Earthquake to combat against Fire Types that Metagross is weak to.

Kingdra is a Dragon Type and able to use the very powerful Dragon Breath as its Fast Move. Due to it being a Dual Type, it doesn't have very many weak points. Kingdra is also very powerful with Water Type moves.

Giratina's Dragon Breath is a Fast Move that can easily fill up its Charge Move gauge and deal massive amounts of damage. Teaching Giratina Shadow Sneak as its 2nd Charge Move will help it bring down Latias/Latios and Metagross.

Since there is no CP limit in Master League, trainers tend to bring out their most powerful Pokemon. Trainers should expect to see powerful, legendary Pokemon so prepare a roster that will counteract them to increase your winning chances.

Zapdos has very few weak points and can survive long in battle. Since survivability is more important in the Master League, Zapdos is an important Pokemon to have in your roster.

Groudon has the highest base stats of all Ground Type Pokemon in the game. Mud Shot easily fills up his gauges, allowing you to use Earthquake & Solar Beam quickly & often. Groudon's max CP is also very high, making him extremely powerful in battle.

Lugia is extremely useful in the Master League. This Pokemon can combat most Types but can be weak against Tyranitar. If you're aiming to win in Master League PVP battles, keep Lugia in your line-up.

Rayquaza is a Dragon Type with very high attack power. Teaching Aerial Ace to Rayquaza as its 2nd Charge Move will enable it to deal massive damage to other Pokemon Types.