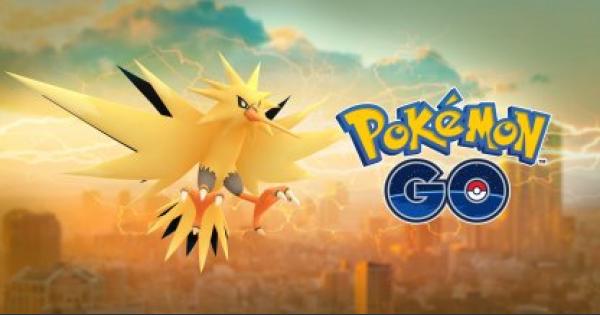 Check out how to defeat Zapdos during Raid Battles in Pokemon GO! Find out Zapdos' type & weaknesses, best Pokemon to use against it, IV and CP charts, and more in this guide!

Best Pokemon To Use Against Zapdos

* Ranking is based on the DPS, ease of use, and durability of Pokemon that are types which are very effective against Zapdos.

Best Pokemon To Use Against Zapdos (Tyranitar)

Tyranitar is a great Pokemon to use against Zapdos because of its Rock Type moveset. It also has a very high attack stat, allowing it to make quick work against Zapdos!

Use Ice And Dragons To Help Tyranitar

Ice Type moves are powerful against Flying Types. Dragons, while okay to use against Zapdos, make up for it by having strong moves, and good DPS against the Pokemon. Assemble a team of Ice Type & Dragon Pokemon to assist Tyranitar!

During the capture phase, if you encounter a Zapdos with CP 2015, then it has a guaranteed 100% IV. Keep this in mind if you are hunting with a 100% IV Zapdos.

Zapdos receives a CP Boost when it is raining or windy. When its CP is boosted, a Zapdos with 100% IV will have a maximum of CP 2519.

You can also check Zapdos's Individual Value (IV) beyond it being 100% value. You just need to check its CP once it appears after defeating it in the raid.

Zapdos Is Weak Against Ice & Rock

Zapdos is a Electric-Flying Type Pokemon, meaning that it will be weak against Ice and Rock Type moves. Make sure to bring in a Pokemon that has either Rock or Ice moves when facing Zapdos!

Trainers, as a part of our Ultra Bonus Event, Articuno, Zapdos, and Moltres return to Raid Battles around the world! With some luck, you might even encounter a Shiny Pokémon... https://t.co/trGGLyA6Kg pic.twitter.com/iX67dFtKCl

...Thank you, Trainers, for working together to complete Professor Willow’s research. There is plenty more to explore, and many new Pokémon to discover. So let’s get out there and GO!