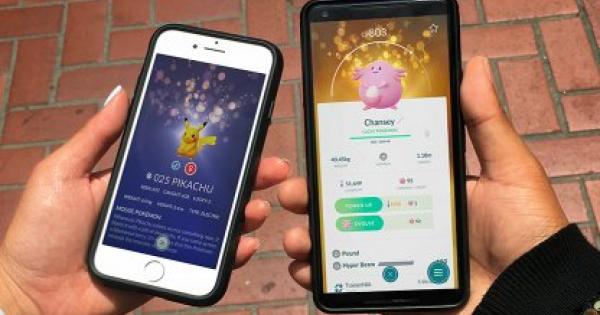 Pokemon Go
How To Get Lucky Pokemon By Trading: Guide & Tips

Check out this Pokemon GO guide on how to get lucky Pokemon by trading in-game. Information includes what are lucky Pokemon, trading probability, individual value, and more!

Check Out What Are Shiny Pokemon Here!

As of now, there are a few guaranteed ways to get a Lucky Pokemon when trading. These methods still work even if one trainer does not satisfy the following conditions.

Niantic has also updated the stats & IV that Lucky Pokemon will come with when received. They will now have a minimum of 80% IV, making them more powerful than before.

How To Get Lucky Pokemon

Get Lucky Pokemon Only By Trading

The only method of getting a Lucky Pokemon is to trade with a friend. Even then, it's a rare chance and you have to be extremely lucky for the trade to occur. Lucky Pokemon cannot be found or caught in the wild.

Check Out How To Trade Here!

Getting Lucky Mythical Pokemon Is Not Possible

Trading the mythical Pokemon such as Mew, Celebi, or Meltan will not result in a Lucky Pokemon, no matter how many times you attempt it.

Probability Of Getting Lucky Pokemon

Probability Of Getting Lucky Pokemon May Be 1/10

This is the probability that has been tested as of time of writing.

There is no clear data on the probability of getting Lucky Pokemon by trading, but , it has been tested that you'll roughly get a Lucky Pokemon in 1 out of 10 trades. Since there is no assurance of this, it's best to keep trading the one Pokemon you want to be Lucky.

Chances Of Getting Lucky Pokemon Don't Go Down

Friendship Level Has No Known Influence

No matter your friendship level with the trainer you're trading with, it has no known effect on giving you Lucky Pokemon.

Check Out What To Do With Friends!

Older Pokemon Have Higher Chance Of Being Lucky

The first few Pokemon you have caught and are still in your Pokemon box may have higher chances of being Lucky Pokemon when traded. If you have Pokemon from 2016, it may be good to trade to get Lucky Pokemon.

*Lucky Pokemon lowest IV can be 10 or less. Check below for details.

Check Out What Is Individual Value Here!

IVs Can Still Change After Trading

Lucky Pokemon Can Get 100% IV After Trade

There is a chance for a Lucky Pokemon's IV to go up to 100% after the trade. If you're aiming for a 100% IV Lucky Pokemon, be sure to trade Pokemon with high IVs in the first place.

A Lucky Pokemon's IV is relatively higher than those caught in the wild, the same as Pokemon hatched from eggs or caught from raid battles.

Did You Get Lucky Pokemon With Low IV After Announcement?

Some trainers may have received a Lucky Pokemon with low IV (80% or less) after its release in-game. This is possible to happen as IVs of Lucky Pokemon do change after trading.

What Are Lucky Pokemon?

Lucky Pokemon require less stardust when you need to power them up. This is the essential characteristic and advantage of a Lucky Pokemon.

Half Of Usual Amount Of Stardust

Lucky Pokemon normally need only half the amount of Stardust to power up. This lessens the cost of raising & powering up your desired Pokemon.

Possible To Get Stronger Pokemon When Trading

It's possible that the Pokemon you receive from a trade may be stronger than the one you sent. This way, it may be easier to get & train more powerful Pokemon by keeping on trading.

Lucky Pokemon have a special yellow sparkling background when you check their status from your Pokemon box in the game.

Has Golden Bubbles When In Inventory

Even in your inventory, you'll see that the Lucky Pokemon will be surrounded by shiny yellow bubbles, compared to your normal Pokemon.

Registered In The Pokemon's Pokedex Entry

You can check the number of Lucky Pokemon you have in the Pokemon's specific Pokedex entry. The number can be found under its Pokedex number and name.

For example, getting a Pokemon Unown, which has many forms, getting one Lucky Unown will automatically make all Unown forms have the Lucky background in its Pokedex entry.

Remains Lucky Even After Evolving

Lucky Pokemon remain Lucky even after you evolve them from their base form. This works the same way as Shiny Pokemon.

There is only ONE way to get a lucky legendary pokemon. If you and a trade partner get a guaranteed lucky trade, it's possible to trade legendary pokemon and have them be lucky. I know, I've done it multiple times already. I have 6 legendary luckys

I had trade & doesnt produce lucky.

Meltan are Mythical but you can still trade them so you can certainly get a lucky Meltan. I have both Lucky Meltan and Lucky Melmetal.

The other Mythical Pokémon are not tradeable, so as of right now (23/4-19), you can't get a lucky Mew, Celebi or Deoxys.