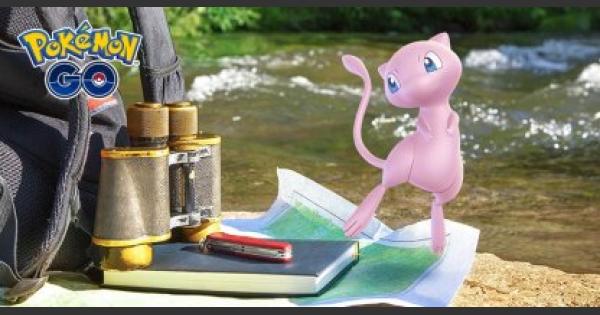 Read this Pokemon GO guide on how to capture the mythical Pokemon - Mew! Information includes special research quest and tasks for A Mythical Discovery, rewards, catching tips, and more!

Check Out What Is Special Research Here!

Mew Is Now In Special Research

Complete a series of Special Research tasks from a quest line called "A Mythical Discovery" and you'll be able to encounter the first mythical Psychic Pokemon - Mew!

List Of All Tasks & Rewards For "A Mythical Discovery"

Use Items To Increase Bonuses

Using items such as Lucky Eggs & Star Pieces will increase your bonus XP & Stardust! Be sure to use these items when you're completing a task or redeeming a reward to get more XP & Stardust!

Pokemon have a distinct distance they need to travel to find a Candy. It's best to buddy with a Pokemon that requires a shorter distance to gather more Candy in a shorter amount of time.

Check the capture circle and make a throw when it's significantly smaller for your toss to result into a Great throw! Excellent throws also count towards completing this task.

Choose Pokemon That Are Easy To Hit

You can choose the Pokemon that have a bigger capture circle & are easier to hit to make your Great throws! Since you do not need to continuously make Great throws in a row, there is no harm in trying.

No Need To Catch Pokemon When Making Great Throw

It's not easy to spot Ghost Pokemon in the wild! The best way to encounter & capture a lot of them is to visit where they spawn frequently. Keep an eye out on your map to find out where you can find a lot of them.

No matter your time zone & despite all the rumors, Ghost Pokemon don't spawn more frequently during the night time. Their spawn frequency has already been increased so there's no need to hunt for them tonight.

Capturing Raid Bosses Are Counted In The Task

Sometimes Ghost Pokemon such as Gengar & Sableye appear as raid bosses in gyms! Defeating & catching them will count towards completing this task.

Check Out What Is Field Research Here!

Ditto is a tricky Pokemon to catch! In the wild, it is a different Pokemon and will only transform back into a Ditto when it is caught.

Check Out How To Find & Catch Ditto!

Visit Areas Where Many Pokemon Appear

A trick to catching Ditto is to go where many Pokemon appear. Find an area where there are several Poke Stops that will lure in many Pokemon to spawn.

Making an excellent curve throw requires practice. It's best to work on your curve balls and making excellent throws by practicing catching Pokemon.

Check Out Tips To Catching Pokemon!

No Need To Catch Pokemon To Complete Task

When attempting to make and Excellent throw, avoid Pokemon that are hard-to-hit, have smaller capture circles, or less optimal distances. You can find the list below.

Pokemon Not Good For Excellent Throws

Efficient Ways To Evolve A Magikarp

To complete this task, you need to evolve a Magikarp. You need 400 pieces of Magikarp Candy to evolve it into a Gyarados!

One way to get more Magikarp Candy is to keep catching the Pokemon! Visit areas such as rivers or bodies of water to see if more Magikarp spawn there.

Use Pinap Berries When Catching Magikarp

Using Pinap Berries & making a successful catch will double the amount of Candy you receive. When you encounter a Magikarp, be sure to feed it a Pinap Berry to receive more Candy.

Magikarp only needs to walk with you for 1 KM before it finds a Magikarp Candy. Make it your buddy Pokemon and keep walking around to farm Candy fast.

Fight Raids With Magikarp As The Boss

Sometimes Magikarp appears as a raid boss in gyms and they are usually low level ones. Participate in raids when you see a Magikarp as the boss to receive Magikarp Candy.

You can also transform your stock of Rare Candy into Magikarp Candy. However, Rare Candy is a valuable item in Pokemon GO and careful thought should be put into it before using them.